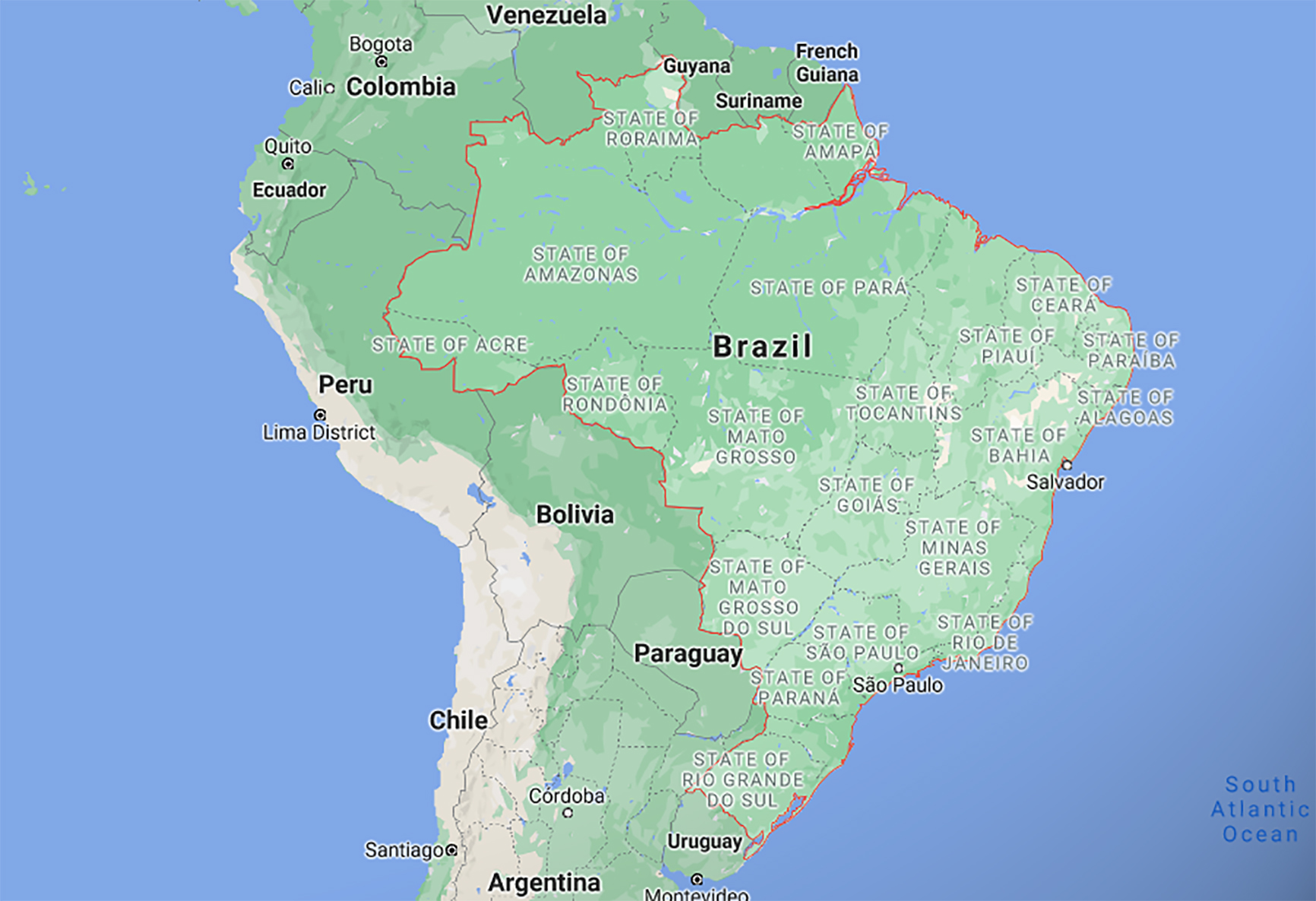 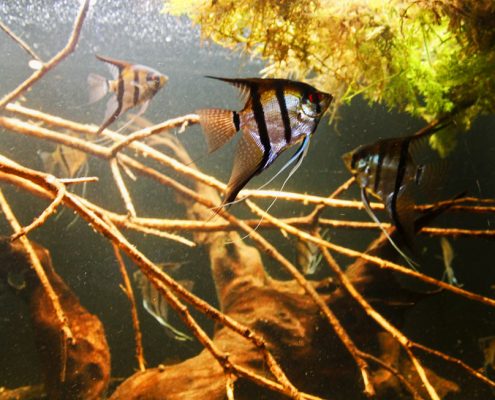 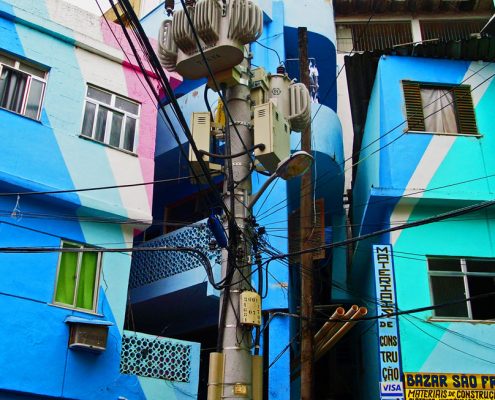 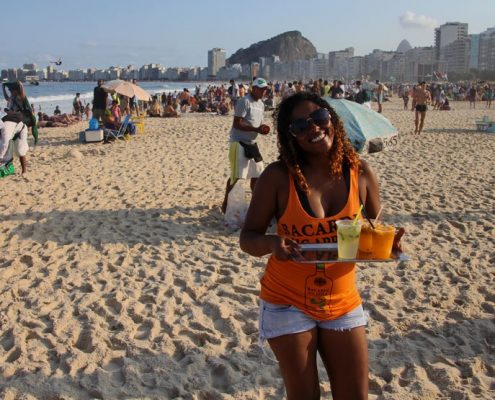 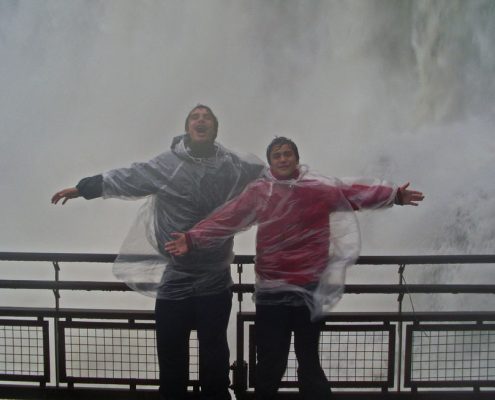 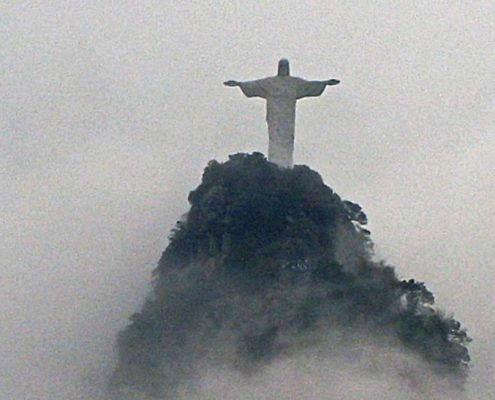 Brazil is the world’s fifth largest country. It occupies a vast area along the eastern coast of South America and includes much of the continent’s interior, sharing borders with Uruguay, Argentina, Paraguay, Bolivia, Peru, Colombia, Venezuela, Suriname, Guyana and French Guiana; that is, every South American country except for Ecuador and Chile. It also encompasses a number of oceanic archipelagos, including Fernando de Noronha, the Rocas Atoll, Saint Peter and Paul Rocks, and Trindade and Martim Vaz.

Brazilian topography is diverse, including hills, mountains, plains, highlands, and scrublands. Most of the southern half of the country consists of uplands. The northwestern parts of the plateau has broad, rolling terrain broken by low, rounded hills.The southeastern area is more rugged, with a complex mass of ridges and mountain ranges. There is also a dense and complex system of rivers and eight major drainage basins into the Atlantic

The climate varies from arid scrubland in the central region, to the impassable tropical rainforests of the Amazon and the tropical beaches. The south is more temperate. Rainy seasons occur from January to April in the north, April to July in the northeast and November to March in the Rio/São Paulo area.

The Brazilians certainly know how to party – you only have to set foot in the country during Carnaval to realise this, with its wealth of music, dancing and revelry. For the nature lovers amongst you, there is superb wildlife viewing, and opportunities for sport abound – kayaking, rafting, trekking, snorkelling and surfing, to name but a few. Brazil is without doubt the one of the world’s most exciting, vibrant, colourful and unique countries. A tremendous extravagance coupled with array of differing social and economic lifestyles.

Places of interest in and around Rio de Janeiro include Sugar Loaf Mountain, possibly the most spectacular landmark in the city; a great place to enjoy a local cocktail and watch the incredibly beautiful sunset over the capital. Tijuca Forest and Corcovado is a magnificent national park with its jungle vegetation, butterflies and waterfalls leading up to Corcovado and the impressive statue of Christ the Redeemer. Petropolis was chosen by Emperor Dom Pedro II for the location of his summer home, which is now restored and houses the Imperial Museum. Salvador in the northeast has a huge number of churches and museums – it is also the hub of Brazilian music and offers an alternative venue during Carnaval.

Thousands of miles of golden sand beaches run along the Atlantic coast, some with huge dunes running down to the sea. The spectacular Iguassu Falls which cross over into Argentina are set in a national park which boasts a huge variety of plant and bird life. The Falls are two and a half miles wide, with 250 separate jumps, for a total height of 200 feet. Journey to the northern coastal city of Fortaleza, a popular resort and the starting point for a trip to Jericoacoara. Just four hours by car, this picturesque village sits between a dazzling white sand-dune desert and a balmy turquoise sea. The wetlands of the Pantanal offer the best opportunity to see wildlife but the real highlight of Brazil is the Amazonas region. Departing from Manaus, visitors have the opportunity to explore this immense rainforest which contains one third of all living species on earth.

The Spanish navigator Vincente Yanez Pinzon first discovered Brazil in 1500, a century before the country was colonised. The first Europeans to settle organised large and efficient plantations, freely exploiting the indigenous Indian population as slaves. The arrival of the Jesuit missionaries slowly turned the tide on slavery and converted millions to Christianity in the process.

In 1822 the Constitutional Emperor & Perpetual Defender Don Pedro was pronounced the country’s leader with Brazil’s Independence. He was in turn overthrown in 1889 and replaced with military rulers, who have played an influential role in Brazilian politics ever since; from 1964-85 the country was under the military until 1985 when Tancredo Neves, previously a Prime Minister and State Governor, was elected as Brazil’s first civilian president for over twenty years. Tancredo Neves in fact died before taking office, therefore enabling his deputy president-designate Jose Sarney to replace him. Presidential elections now take place every four years. Economically Brazil is massive with the tenth highest aggregate GNP dominated by huge mineral reserves and abundance of fertile land.

In 2002, Luiz Inácio Lula da Silva (Lula), a former shoeshine boy and metalworker, ran a widely celebrated left-wing government. He helped establish Brazil as a major international economic power whilst investing in social welfare and the country’s poorer citizens. Current president Dilma Rouseff was a close political ally of Lula and is the first woman to hold office in Brazil.

Environmental pressure has highlighted the massive destruction of the Amazon rain forest and effect of mineral mining on not only the indigenous Indian population and surrounding areas, but the world’s climate as a whole. Nomadic Thoughts continue to support the banning of Amazon Rain Forest destruction and uncontrolled mining that contributes to the poisoning of all the important rivers and inland waterways. Although Britain’s government has agreed upon a more ‘ecologically sensitive’ approach to rainforest development with the Brazilian government, it is subject to debate whether they should play a more active part in helping to provide a more concentrated aid package with technical assistance.