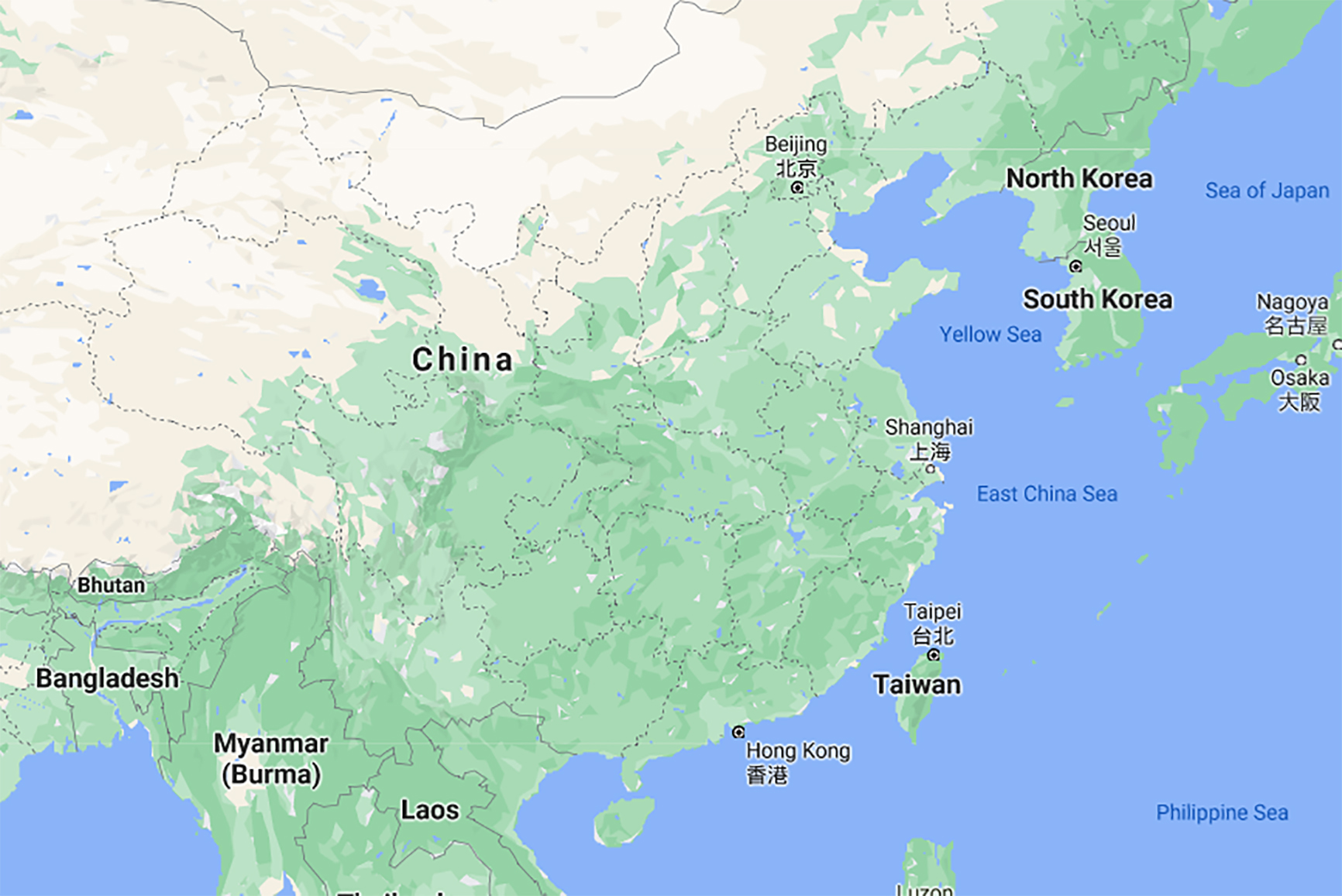 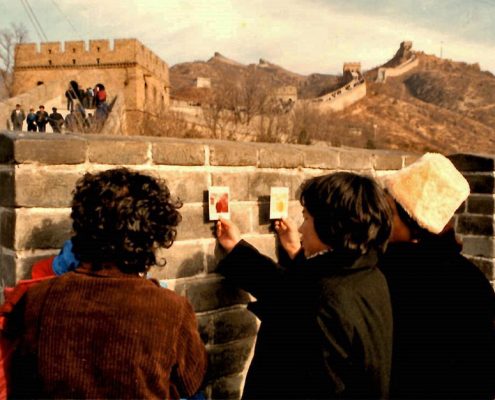 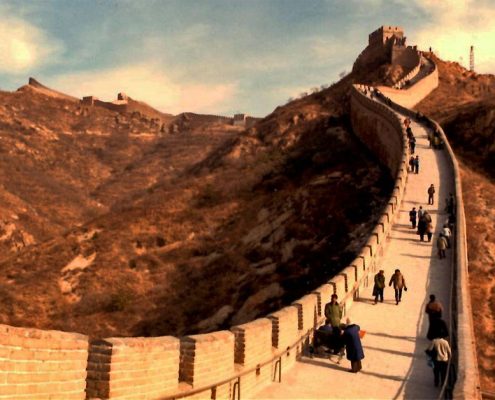 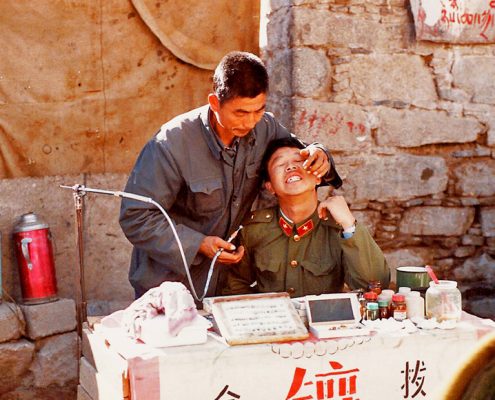 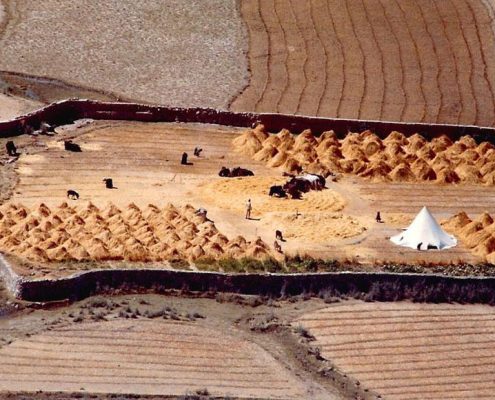 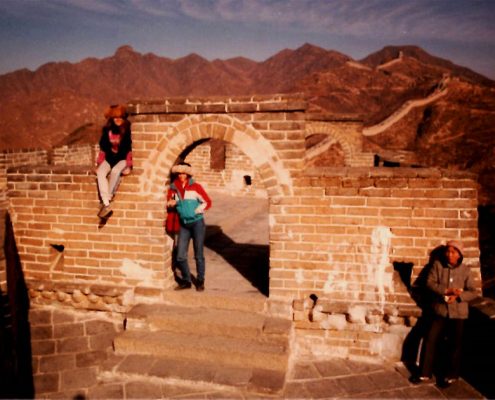 China is bounded to the north by Russia and Mongolia; to the east by Dorea (DPR), the Yellow Sea and the East China Sea; to the south by Vietnam, Laos, Burma, India, Bhutan and Nepal; and to the west by India, Pakistan, Afghanistan and Russia.

The most distinctive mountain ranges are the Himalayas, Altai, Tianshan and Kunlun mountains. On the Tibet/Nepal border Mount Everest (13,200ft) stands over looking the Tibetan high plateau. In the west the Qinghai/Tibet plateau dominates as the ‘Roof of the World’. The main urban areas serviced by foreign investment, skills, communication and technology are to be found in the fertile alluvial lowlands which stretch from Manchuria to Hong Kong. Incredibly, only 10% of all China is suitable for agriculture.

Land of the billions from people to bicycles – almost a quarter of the world’s population can be found in China! This is a country where ancient past meets the exciting future; the contrast of the two worlds is clearly noticeable across the country.

It is a land offering countless outstanding attractions; deserts, mountains, fertile plateaus, thousands of miles of coast and hundreds of differing cultures – the options are too numerous to mention. Beijing, not only the political and administrative centre of China but also the country’s single greatest repository of monuments and treasures from the imperial era including the Forbidden City, Tiananmen Square and the famous Great Wall.

In the Northern Provinces the Terracotta Warriors in X’ian are a must – this is also the starting point of the ancient trade route, the Silk Road. In the Eastern Provinces Shanghai is one of the world’s largest cities with the look and feel of a great Western metropolis. Other places of interest include Hangzhou, Nanjing and Suzhou where countless temples, gardens, lakes and historical sites can be found.

Guilin is the highlight of the Southern Provinces – the scenery here with steep mountains springing from lush green plains is unique both to China and the rest of the world. Yangshou, reached by boat along the Li River from Guilin, is a delightful small country town set amongst some of China’s most attractive scenery. The Wolong Nature Reserve outside Chengdu in the Central Provinces offers an opportunity to see the giant pandas.

A Yangtze River cruise between Chongqing and Wuhan is the best way of enjoying the spectacular scenery and visiting the numerous areas of historical and cultural importance en-route. The list of attractions is never-ending – to cover them all, several visits to China are recommended!

China is roughly the size of Canada or the United States. Nevertheless with a population of over 1.3 billion it contains roughly a staggering one fifth of the world’s human beings. China is a land offering many outstanding contrasts; deserts, mountains, fertile plateaus, thousands of miles of coast and hundreds of differing cultures, not to mention fascinating food that bears little resemblance to the ubiquitous western ‘Chinese takeaway’

The enormous economic drive of the last decade means many of China’s cities are increasingly shaped by modernity, but it’s also somewhere underpinned by dearly held traditions. China is colossal in size and character, and more to the point, it’s the word on everybody lips at the moment. Attempts to understand this so very foreign nation will be essential in coming years, making a trip to China one of the most worthwhile you could make.

It is increasingly clear that China soon stands to become the most important nation on Earth. In the 3rd centuiry BC the Chinese were united into a single empire under the Qin Dynasty who built the Great Wall. Power then passed to the Han Dynasty for four centuries, after which there was a long period of bitter internal conflict.

The Qing was the last dynasty in China until Sun Yat-sen founded the Republic of China in 1911. In 1937 the Japanese invaded and occupied China with great brutality until they were eventually driven out in 1944. Civil war then broke out between nationalists and Mao Zedong’s communists. In 1949, the victorious communists founded the People’s Republic of China, giving rise to the notorious Cultural Revolution.

By the end of the 1980s, there was widespread agitation in favour of political reform, and action against the corruption that had become widespread. In May 1989 several thousand students and workers occupied Tiananmen Square in their frustration at the lack of change. However protest was not tolerated and the army was sent in to clear the square. The exact number of students and workers killed varies according to who is reporting but it is believed to be over 500.

During the 1990’s the leadership slowly evolved with a new, more progressive style coming in. Vice-President Hu Jintao took over the presidency from Jiang in 2003 and although still tightly controlled, the country began to be more forward-looking and an immense economic powerhouse. Xi Jinping became President in 2013 and has led a crack down in Tibet.

China today is a one-party state ruled by the Communist Party of China, and has been much influenced by globalised modernity, placing scientific development at the centre of its plans for growth. Since the introduction of market-based economic reforms in 1978, China has become the world’s fastest growing major economy, and the second largest economy. It is a recognised nuclear weapons state and has the world’s largest standing army with the second-largest defense budget. As a superpower in the making, this is one country it is increasingly impossible to ignore.