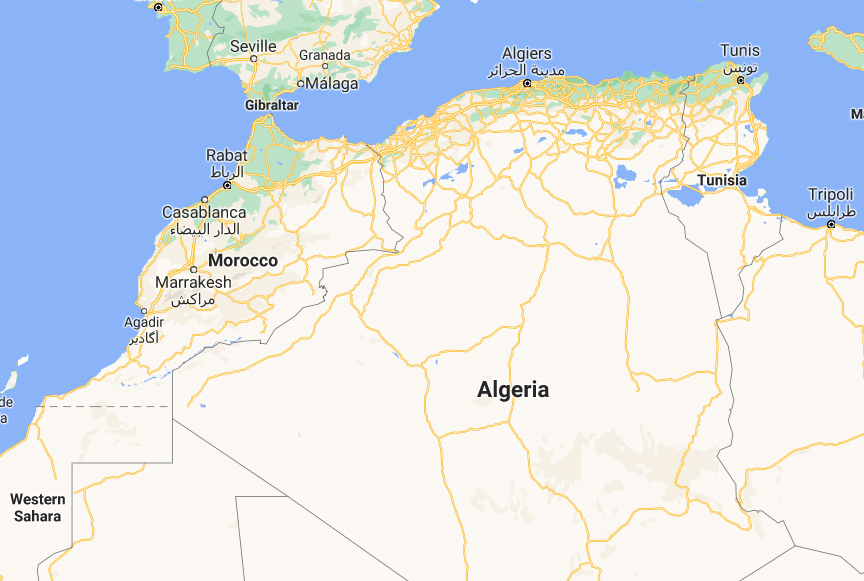 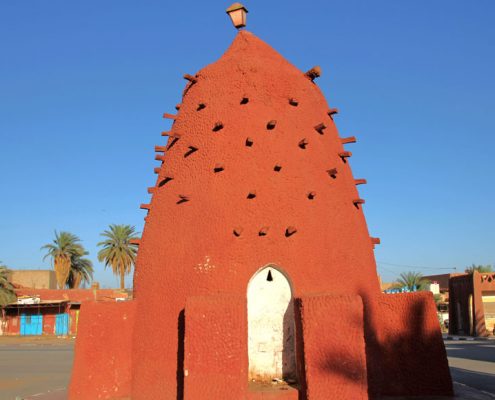 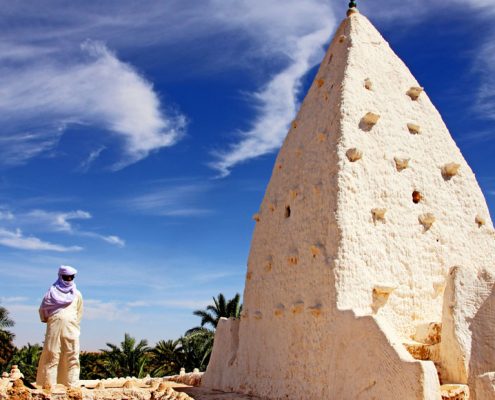 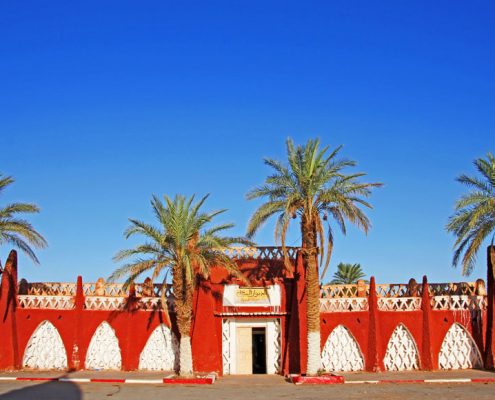 Algeria is bordered by Tunisia in the northeast, Libya in the east,  Morocco in the west. In the southwest it is bordered by Western Sahara, Mauritania, and Mali, and in southeast by Niger. In the north is the Mediterranean Sea.

Most of the coastal area is hilly, sometimes even mountainous, and there are a few natural harbours in the Mediterranean. The area from the coast to the Tell Atlas is fertile. South of the Tell Atlas is a steppe landscape, which ends with the Saharan Atlas; further south, there is the Sahara desert, which covers more than 90% of its landmass.

The Ahaggar Mountains, also known as the Hoggar, are a highland region in central Sahara, southern Algeria.

Algeria has a Mediterranean climate along the coast, with mild, wet winters and hot, dry summers. The coastal area is best visited in spring and summer months.

The Sahara desert has extremely high summer temperatures, so it is best to go to this part of Algeria between late autumn and early spring (November to April). Although daytime temperatures rarely fall below 25°C, night time on the desert can be cold even in the height of summer.

Rainfall ranges from more than 1000mm per year in the northern mountains, to zero in the Sahara. Some places go decades without a drop.

A wealth of activities is possible in Algeria – cycling, camel trekking, skiing, and sand boarding on desert dunes, to name but a few. French colonial Algiers a large, white-washed capital, is a booming modern Arab city where the population doubled in just 20 years.

Don’t miss the Bardo Ethnographic and Local Art Museum with one of the finest galleries in North Africa.

In the ancient Carthaginian city of Constantine, visit the Ahmed Bey Palace and Djamma el-Kebir Mosque.

Watching the sunrise over the peaks at the Holy City Assekrem is truly worth the trip.

The Chiffa Gorges are covered in olive and fig groves in the summer, but can be skied on in the winter. Finally, make a trip to the beautifully preserved Roman city of Djemila.

Having won independence from France in 1962, following a long and bloody War of Independence that remains the defining event of the country’s modern history, Algeria has had a dramatic and rocky first half-century of going it alone. Following a secular, socialist path throughout the 1970s and 1980s to keep the simmering Arab-Berber tensions at bay, the country nevertheless became mired in popular discontent by the late 1980s.

In the 1990s, Algerian politics was dominated by a bloody struggle between the military and Islamic militants that engulfed much of the county and caused huge loss of life. The civil war petered out by 2002, when Abdelaziz Bouteflika, formerly Algeria’s long-standing and respected foreign minister, was elected Algeria’s president, a role he has held ever since. Bouteflika has run the country with an iron hand ever since, and while being no democrat, he has arguably brought the country something it needs far more in the short term – stability and peace.

The government has challenges form both Islamic militants and the country’s Berber ethnic minorities. The Berbers want a greater cultural and political presence and to date their own language of Tamazight has been recognised as an official national language.

Algeria in recent years has been largely stable, with the problems of violence and kidnapping that have plagued it for so long now consigned to the past. President Bouteflika won his third term in office in 2009 and while democracy and human rights continue to suffer under his rule, the economy is finally growing again.

Following a wave of protests in the wake of popular uprisings in Tunisia, Egypt, and Libya, Algeria officially lifted its 19-year-old state of emergency in February 2011. Meanwhile, discontentment remains with censorship of the media and elections appearing unfair.