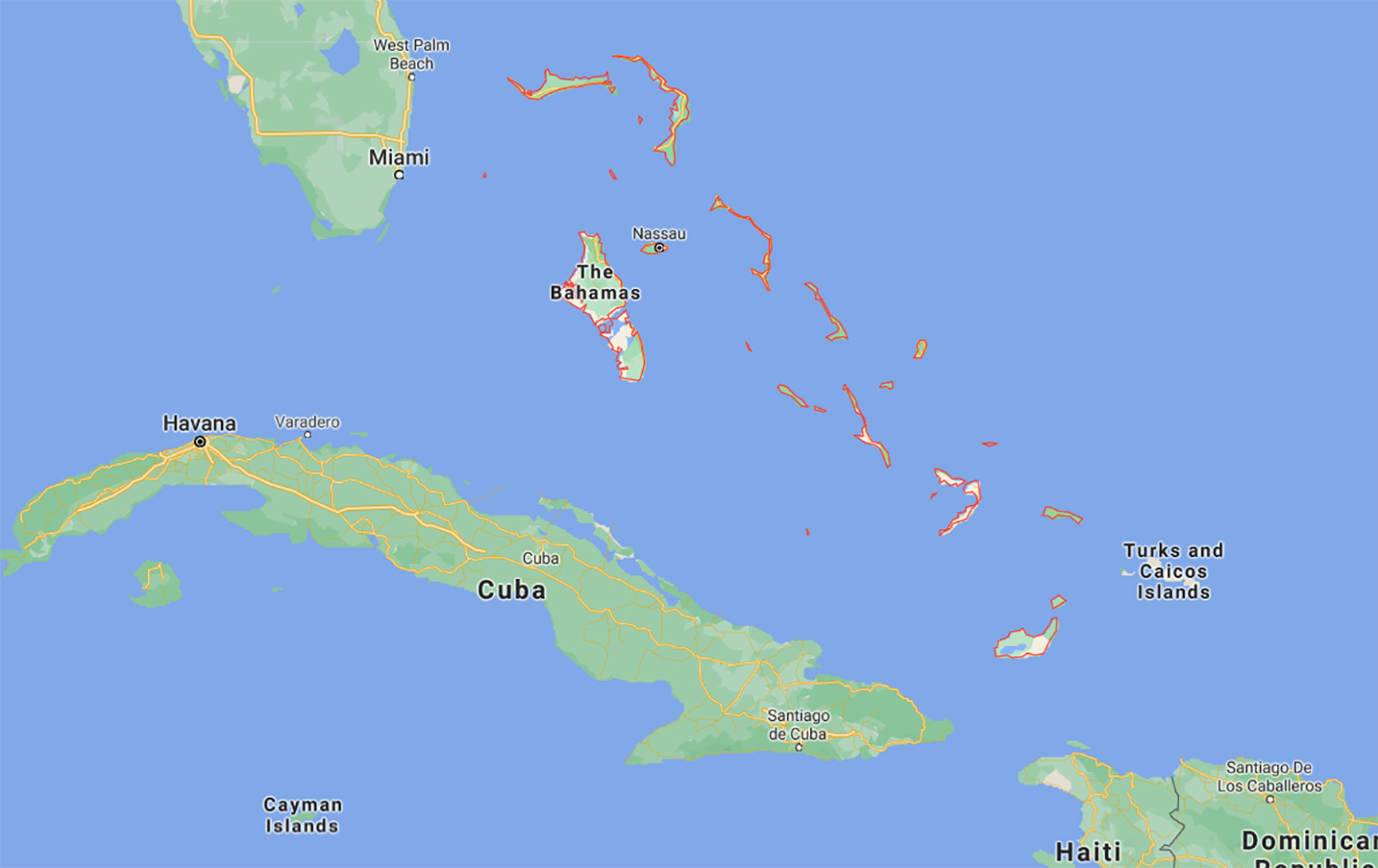 All the islands are low and flat, with ridges that usually rise no more than 15 to 20 m). The highest point in the country is Mount Alvernia, formerly called Como Hill, which has an altitude of 63 metres (207 ft) on Cat Island.

The climate of The Bahamas is subtropical to tropical, and is moderated significantly by the waters of the Gulf Stream, particularly in winter. An almost-constant temperature prevails throughout the Bahamas thanks to refreshing, cooling trade winds. September to May is freshest at around 21-24°C (70-75°F) with warmer weather at around 27-29°C (80-85°F) the rest of the year. The temperature drops about 5°C (41°F) after dark. The weather often proves very dangerous in the summer and autumn, when hurricanes pass near or through the islands

Pale pink sands in Harbour Island, sea lions and bottle-nosed dolphins on Blue Lagoon Island, rolling pineapple plantations, the charming colonial architecture of Eleuthera, fishing in almost any bit of water you can lay eyes on, some of the world’s prettiest golf courses, Lucayan National Park with its fascinating underwater cave systems, wreckdiving off the Abacos – there are enough activities in the Bahamas to keep you busy for weeks.

The original inhabitants, the Lucayan Indians, survived through fishing and a developed trading system with Cuba and Haiti, flourishing until 1492 when the Bahamas were first discovered by Europeans under Columbus. San Salvador, near modern-day Cockburn Town, was his first landing place in the New World.

Close to key trading routes, settlers arrived in their droves: most notably the Eleutheran Adventurers, a group of English religious dissidents, in 1647. Adventurers they certainly were: braving food shortages and piracy before establishing a more easily-defensible settlement on Harbour Island. The era of privateering raged on: the pirate Blackbeard was at one time “magistrate” of a pirate-controlled Nassau before the islands were formally colonised by Britain in 1717, under Woodes Rogers (himself an ex-privateer). The islands were briefly re-occupied by the Spanish in 1782 but returned to Britain the following year.

A comparatively peaceful, prosperous era ensued. An early haven for freed slaves, the islands lucratively became a trading post for Confederate cotton in the American Civil War; during the Prohibition the port of Nassau had to expand to cope with the surge in the rum trade. When glitzy Cuba closed to tourism in 1962, the Bahamas quickly promoted itself as the bona fide holiday destination for America’s wealthy. Internal self-government arrived two years later, followed by full independence in 1973.

Post-independence politics in The Bahamas have been dominated by Sir Lynden Pindling, first elected as head of the Progressive Liberal Party (PLP) in 1967. The damage to Pindling’s reputation following drug trafficking claims, and the islands’ poor economic performance during the early 1990s led to the PLP’s rejection by the electorate at the August 1992 polls. The new premier was long-time opposition leader Hubert Ingraham of the Free National Movement (FNM). The PLP regained control of the government in 2002 before Ingraham became Prime Minister again in 2007.

In late 2004, Hurricanes Frances and Jeanne caused extensive damage in The Bahamas, but tourism and offshore finance have nonetheless secured the Bahamas their place as the third richest country in North America, after the USA and Canada.