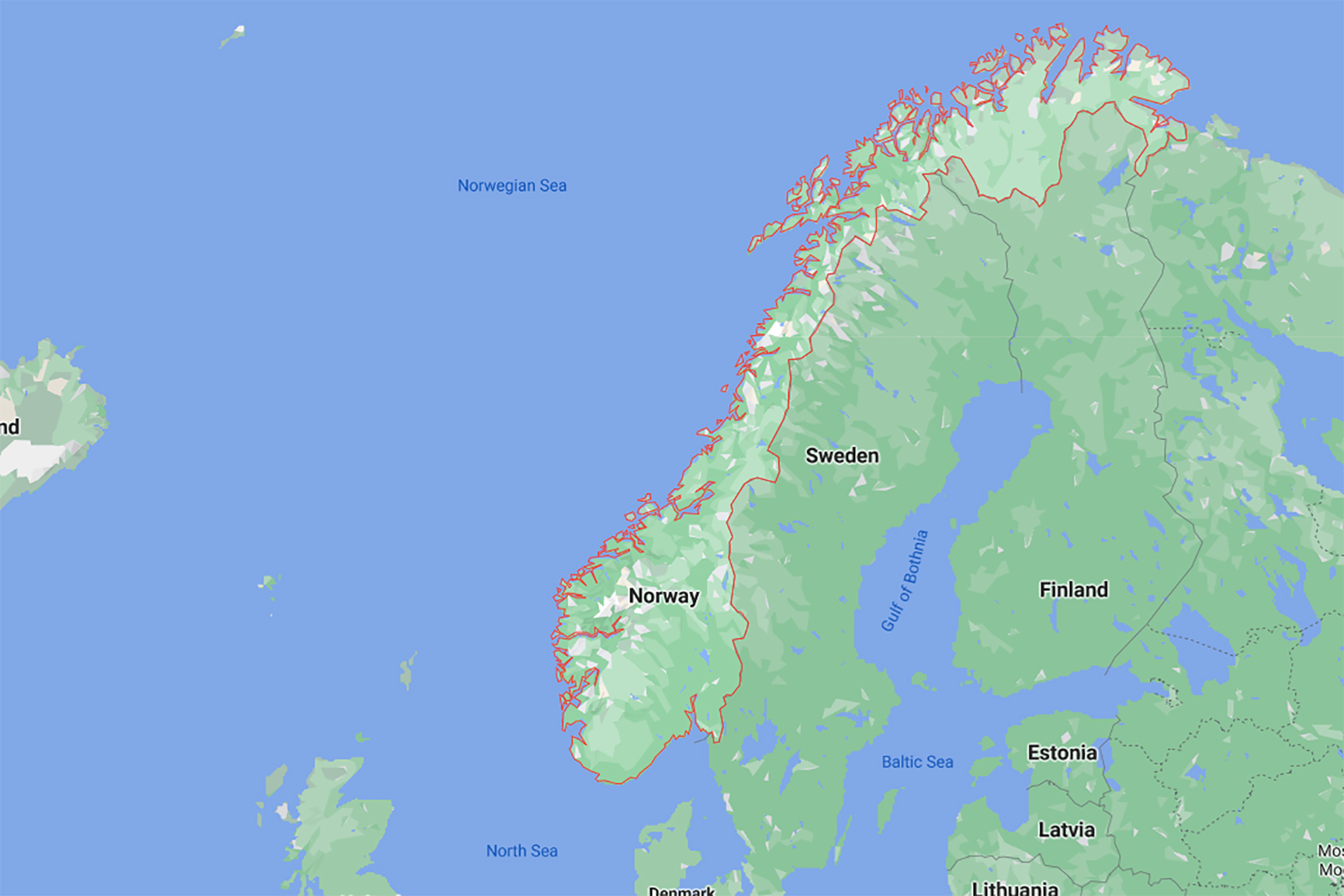 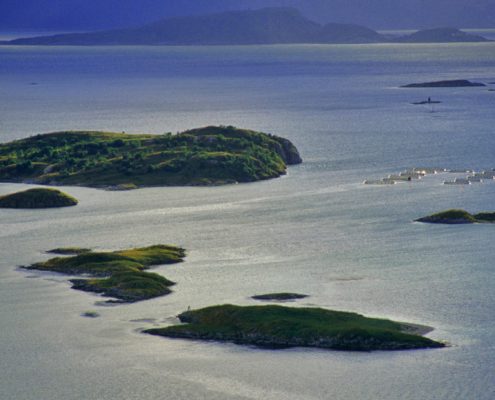 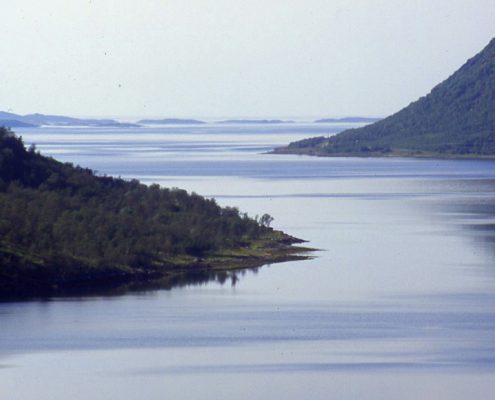 Norway’s northern coast gives way to the Arctic Ocean. It is bordered by Sweden, Russia and Finland, and to the south by the Skagerrak (which separates it from Denmark). The coastline is over 25,000km (15,534 miles) long, its most outstanding feature being the fjords. Most of them are from 80km to 160km (50 to 100 miles) long, and are usually flanked by towering cliffs and mountains. Much of northern Norway lies beyond the Arctic Circle and consequently gives way to windswept tundras. The lanscape to the south is covered with mountainous pine and larch forests, and dotted with lakes.

Norway has the same latitude as Alaska but a surprisingly temperate climate, as it benefits from the Gulf stream. Average maximum temperatures for July are about 16°C in the south (although they can reach as high as 30°C) and around 13°C in the north. At the other end of the scale, in winter temperatures plummet (as an extreme example, in January 1999, the temperature in Kirkenes dropped to a frosty -56°C). Snow up to 10m deep can accumulate in the mountains; a mere 2m to 3m is more usual in the lower areas. Anywhere north of the Arctic Circle, the true midnight sun is visible at least one day a year, and at Nordkapp it shines from 13 May to 29 July.

Norway boasts some of the prettiest cities in Northern Europe: Bergen is a picturesque former Hanseatic trading port and the gateway to Fjordland. Trondheim has long been an important Christian pilgrimage destination, while Ålesund houses some unparalleled Art Nouveau architecture. Further North, the island of Svalbard is one of the few areas where polar bears can be easily seen. The culture of the indigenous Sami people, whose territory covers the northern tip of Norway as well as neighbouring Sweden and Finland, is fascinating. Brave the winter cold of Norway’s Arctic region (October to March) to see the enchanting northern lights: it’s well worth it. Be sure to visit one of Norway’s twenty-eight surviving wooden medieval churches. Perched on top of a jutting 600m-high cliff overlooking the bright blue waters of Lysefjord, Pulpit Rock is worth the hike for the stunning views alone. Experience traditional Norwegian folk music, dance and food at one of the frequent summertime events held at the Norske Folkemuseum and visit Hardanger Fjord, a popular tourist destination and a scenic area offering virtually every kind of natural landscape available in the country – from waterways to apple and cherry orchards, hiking trails to mountain plateaux. Don’t miss Hardangervidda, Norway’s largest national park, nor the Folgefonna and Hardangerjøkulen, Saltstraumen glacieres, the world’s most powerful whirlpool, and the stunning views of Norway’s most famous waterfall, Vøringsfossen. Enthusiastic skiers and snowboarders will be thrilled with the picturesque terrain, and there is fishing and rock climbing galore for lovers of the Great Outdoors.

Early Norse civilisation, in particular the Viking era, is one of the best known periods of Norwegian city, especially as it bore such oft-studient cultural fruit as the Anglo-Saxon epic poem Beowulf. The ferocity of Viking warriors is still remembered in coastal areas of the UK and Iceland today. The age of the Vikings came to an end with the advent of Christianity and the death of King Harald Hardrada in the battle of Stamford Bridge in 1066.

Between 1200 and 1905 Norway lost its sovereignty, first to Denmark and then to Sweden when it was handed to Stockholm in 1816 – Denmark was forced to concede the territory, being on the losing side in the Napoleonic wars. After a long struggle, Norway finally gained independence in 1905 after a referendum recognised by Sweden. But its newly won autonomy was destined to be shortlived – the Germans invaded in 1940, installing a puppet government led by Vidkun Quisling. Norway only regained its independence as a constitutional monarchy after the Nazis were defeated in 1945.

The most divisive issue in contemporary Norwegian politics has been membership of the European Union. Public concerns about the effect of EU membership on the country’s major industries led the electorate to vote twice to stay outside the EU, the national referendums of 1994 and 1998. However, Norway has joined the European Free Trade Area, the bloc representing most of the European nations which are not EU members.

The Norwegians have established a reputation for handling sensitive conflict negotiations. The most important of these initiatives was their role in hosting and mediating the negotiations leading up to the 1994 Israeli-Palestinian peace accord – one of the major foreign policy coups of in recent years.

Norway’s post-war governments have been either conservative or Labour-led coalitions. Usually a peaceful and stable country, July 2011 saw an attack on Stoltenberg’s Oslo offices and, tragically, on a youth camp on Utøya Island, which resulted in Norway’s largest loss of life since the Second World War.