Top tip: ကံယုံ၍ ဆူးပုံမနင်းရာ – Burmese proverb: “Don’t jump into a pit of thorns out of blind faith” … so do your research on how best to make travel to Myanmar a positive experience. 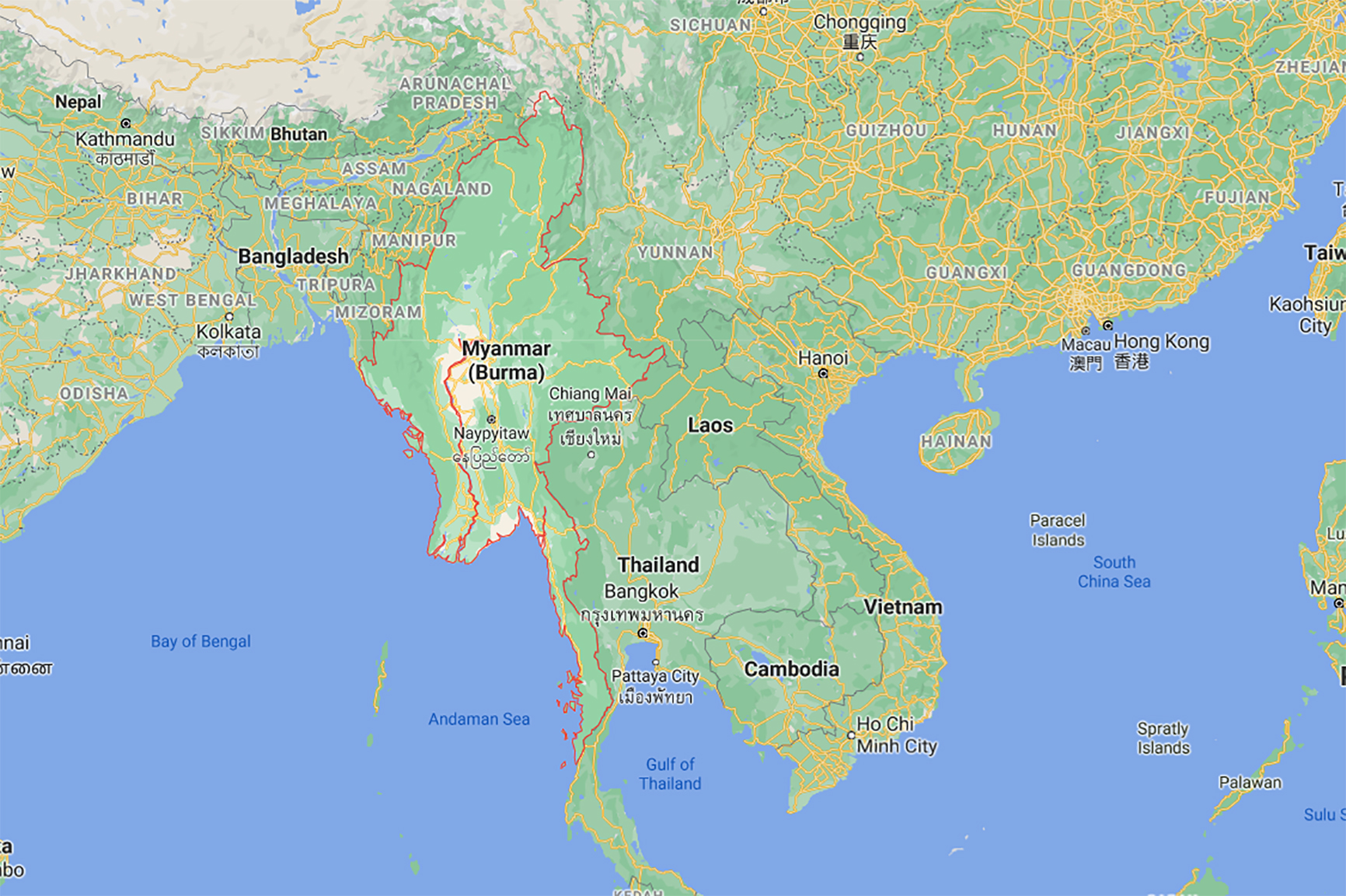 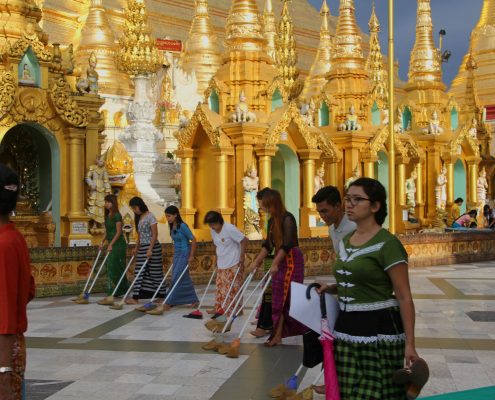 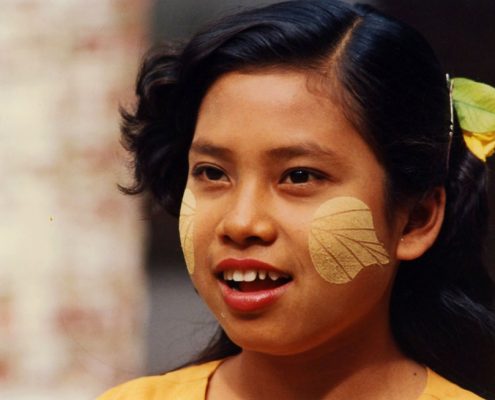 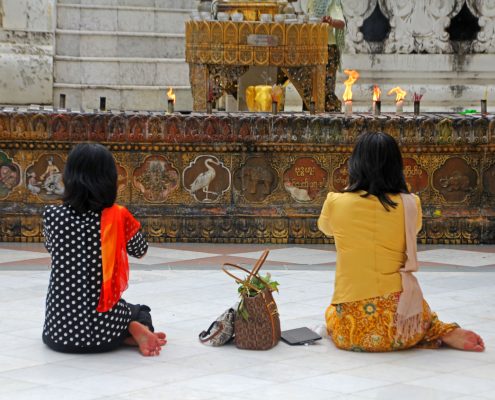 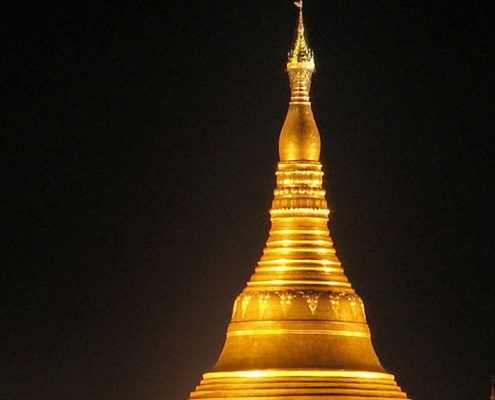 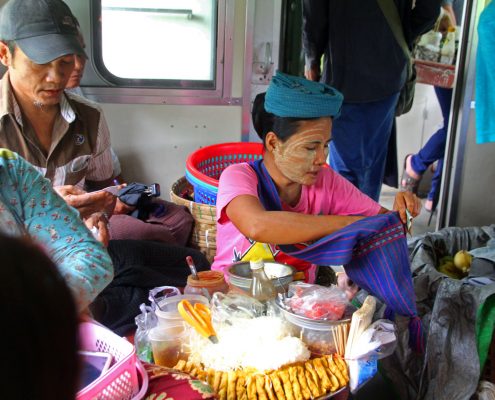 Burma is bounded by China, Laos and Thailand in the east, and by Bangladesh, India and the Indian Ocean in the south and west. The Irrawaddy River runs through the centre of the country and forms a delta on the south coast. North of the delta lies the Irrawaddy basin and central Myanmar, which is protected by a horseshoe of mountains rising to over 3000m, creating dramatic climatic effects. To the west are the Arakan, Chin and Naga Mountains and the Patkai Hills; with the Kachin Hills to the north and the Shan Plateau to the east, extending to the Tenasserim coastal ranges.

The hottest period is between February and May, with very little rain. The rainy season exists from May to October, for a few months from then the weather is quite reasonable, even cool in Mandalay at night. The Burmese New Year in April, at the peak of the hot season, which means much fun throwing water at all concerned. November through to February are the best visiting months.

Officially the Republic of the Union of Myanmar, the country known as Burma is an absolutely fascinating place to visit, unique in that it has been closed to the outside world for decades. With thousands of temples and beautiful pagodas, enormous golden Buddhas bathed in sunlight every morning and more than four thousand sacred stupas, Burma’s architectural beauty is virtually unparalleled.

There are dense forests for the adventurous among you and beautiful underdeveloped coastal regions for sun seekers. The locals are generous and gentle, ever-inquisitive about the outside world they have been shielded from for so long. You will soon find a multitude of invitations to share their hot and spicy regional cuisine, or a cup of their fragrant tea that turns the tongue bright red.

Yangon (or Rangoon) the capital of Burma, is a wonderful city full of temples, open-air markets, food stalls and old colonial architecture. The Shwe Dagon Pagoda is one of the most spectacular Buddhist shrines in Asia and reputedly 2500 years old; the Sule Pagoda, also over 2000 years old makes a fantastic spectacle at night. The Botataung Pagoda has a maze of mirrors which is definitely worth a visit. Don’t miss the extensive Bogyoke market.

Just northeast of Pegu is the Shweethalyaung Buddha, thought to be one of the most beautiful and lifelike of reclining Buddhas. Make sure you go to Pagan, an amazing deserted city of fabulous pagodas and temples on the banks of the Irrawaddy – the Gawdawpalin Temple, built between 1174 and 1211 and one of the best places to catch the Irrawaddy at sunset.

Mandalay is the old royal city with abundant palaces, stupas, temples and pagodas to visit. It is also the main centre of Buddhism and Burmese arts. Mingun is a pleasant river trip from Mandalay and is the home of the famous Mingun Bell, supposedly the largest uncracked, hung bell in the world. The East offers opportunities for walking and rock-climbing. The caves at Pindaya contain thousands of Buddha images and also the Padah-Lin Caves near the village of Ye-ngan contain prehistoric paintings, both are well worth a visit.

Burmans first settled in the area during the 9th century and had established a powerful kingdom by the 11th century. During the Mongol invasions the country was captured byKublai Khan (1287) and subsequently Burma became divided. By the mid-18th century a new dynasty was established with its capital in Yangon.

In 1824, the British annexed Burma as part of British India. In 1937 it was granted separate dominion status. The Japanese expelled the British from Burma during World War II. They tried to co-opt Burmese political support by offering nominal independence under Japanese control. This started the independence movement led by Aung San as the Burmese opposed Japanese rule. When the Japanese were defeated in 1944, Aung San led the way to independence in 1948 but was assassinated the same year.

In 1988 years of chronic economic mismanagement by the Socialist Programme Party brought on a popular uprising, with students and Buddhist monks to the fore. A military coup in September, followed by the bloody suppression of the demonstrations, brought the political upheaval to a halt. Rather than leading to the deposition of Ne Win it actually strengthened his position within the country. Ne Win has recently relinquished his official titles as leader of the nation but he continues to exercise considerable influence over the running of the country. The major armed threat is posed by a number of border groups, the largest being the Karen tribe whose ranks have been swelled by dissident students fleeing from the capital.

After crushing domestic political opposition, the Ne Win junta decided to calm international opinion. So in 1989 that some political concessions were made with the announcement that there would be elections. In addition Burma became officially known as the Union of Myanmar.

The main opposition movements campaigned under the banner of the National League for Democracy, led by Aung San Suu Kyi. They won the 1990 election but the regime held onto power using various delaying tactics and Suu Kyi was put under house arrest for five years.

But Aung San Suu Kyi, the main opponent of the regime remained a major thorn in it’s side during the 1990’s and assisted in making the regime an international pariah. In 2000, she was put under house arrest, released and then again arrested and jailed in 2003. In 2009, she was placed in a Rangoon prison for allegedly breaching the terms of her house arrest despite international condemnation.

The country’s turmoils continued with the 2007 Saffron Revolution in which monks and civilians were beaten, killed or arrested during anti-government protests. Elections in February 2011 saw Thein Sein of the Union Solidarity and Development Party elected as President of Myanmar.

Potentially Myanmar is a rich country, but the economy has never thrived – in fact it is to this day one of the least developed in the world. Livestock and fishing is the largest sector, but it is still using traditional non-mechanised systems.

With a history of poor health care, human rights violations and political instability, the Burmese people have suffered more than their fair share. However the remain one of the most considerate and welcoming of peoples, making travel to this country a delight, whatever its past may be.