Top tip: Time is of an essence 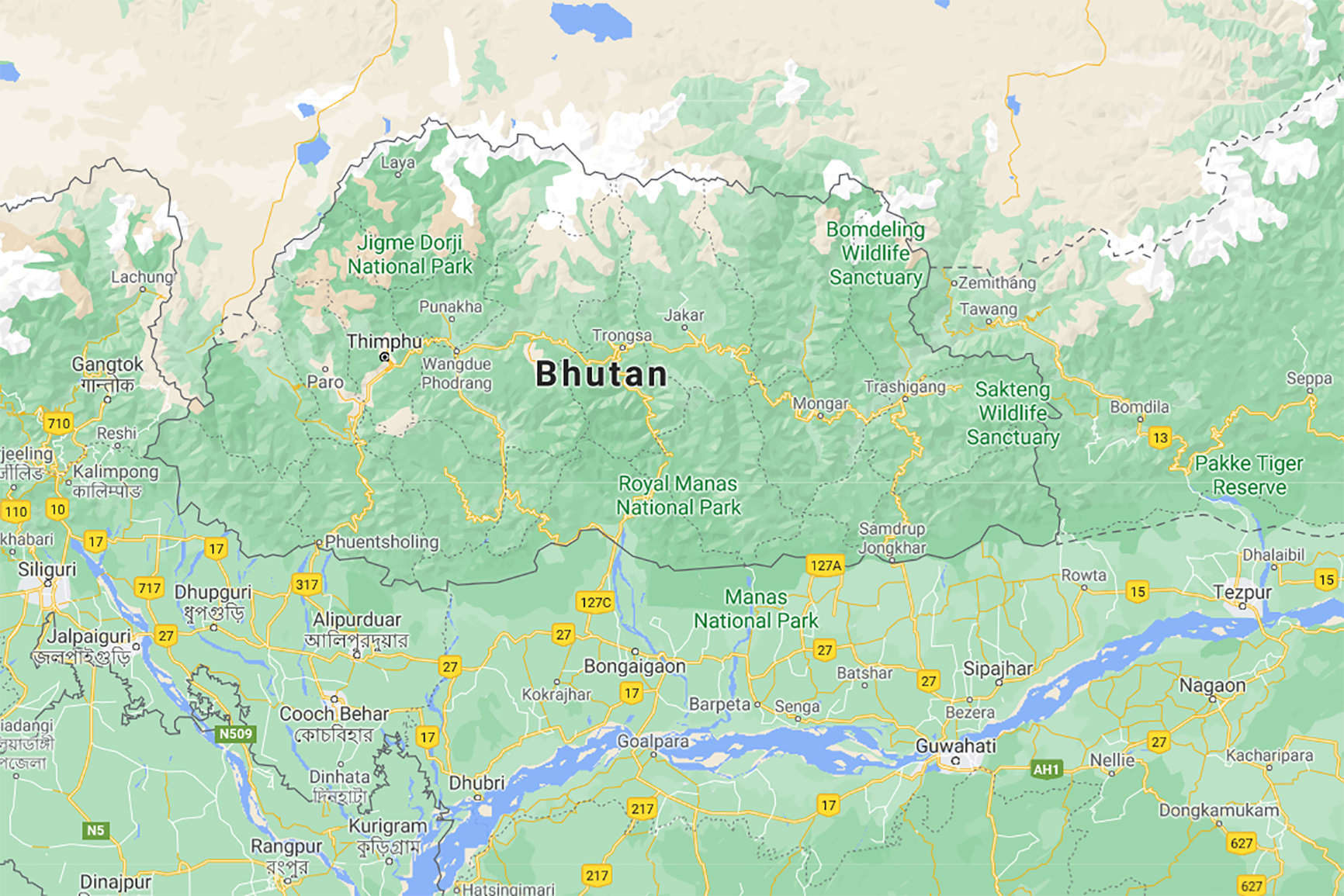 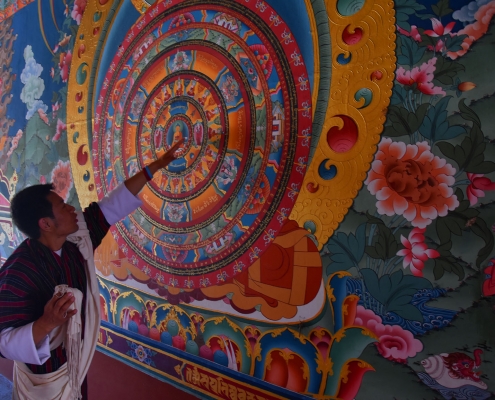 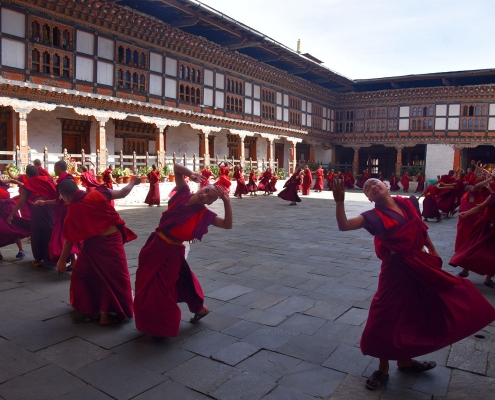 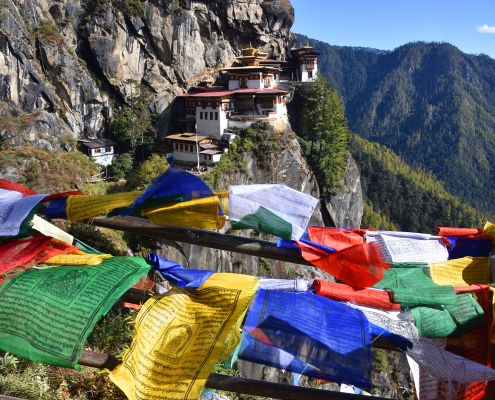 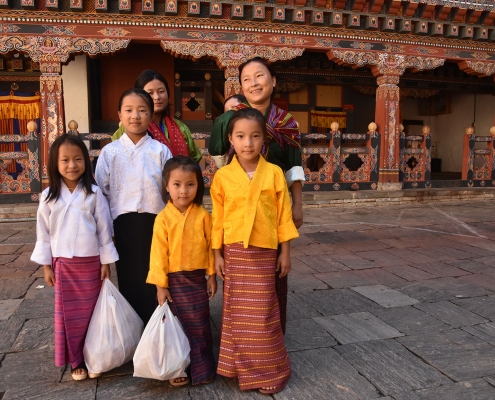 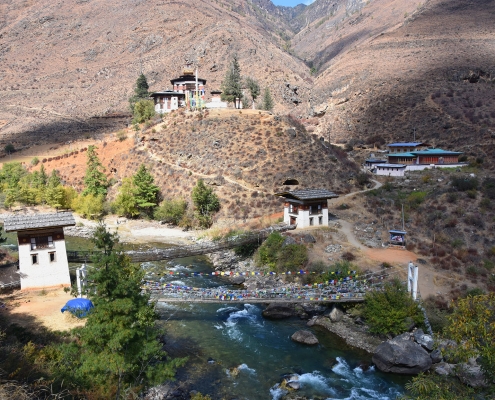 Bhutan is situated in the Eastern Himalayas of the Indian Sub Continent on the border between the North West of India (Assam) and China. The altitude varies from 300m in the lowlands region to 7000m in the Himalayan Plateau.

There are three distinct climatic regions: The Foothills, where the weather and vegetation is tropical including many species of wild orchid. Deer, lion, leopard and the rare golden monkey can be found. The Inner Himalayan region where the climate is temperate and area is rich in deciduous forests. The wildlife includes bear, boar and sambar. The High Himalayan region is cold due to the altitude which also makes it thinly populated. However, the steep slopes of the mountains are home to many species of animals including snow leopards and musk deer.

There are four distinct seasons similar in their divisions to those of Western Europe. The Monsoon occurs between June and August when the temperature is normally between 8° – 21° C (46° – 70 °F). Temperatures drop dramatically with increase in altitude. Days are usually very pleasant (average about 10° C/ 50° F) with clear skies and sunshine. Nights are cold and require heavenly woollen clothing, particularly in winter. Generally October, November and April to mid-June are the best times to visit– rainfall are at a minimal and temperatures are conducive to active days of sightseeing. The foothills are also very pleasant during the winter.

The Tashichhodzong in Thimpu is the main religious and administrative centre of the country which was rebuilt in 1961 after being damaged by fire and earthquake.The Handicraft Emporium has a wide selection of beautifully hand woven and crafted products. The National Memorial Chorten is a monument dedicated to the Third King of Bhutan, ‘The Father of Modern Bhutan’. Here the paintings and statues provide a good insight into the Buddhist philosophy. Simtokha Dzong houses the school for Buddhist studies.

Paro Valley, to the west of Thimphu is highly recommended where The Taktshang Monastery, ‘Tigers Nest’ clings to the cliff of a rock at 800 meters from the valley floor. Trekking around the valleys and mountain gorges is the best way to enjoy the breathtaking scenery of Bhutan. Trout fishing in the pristine rivers is another highlight.

Until 1974 Bhutan preferred to remain isolated from the tourist industry and the rest of the world. The Royal Government has consciously chosen to limit the opportunities for travel to Bhutan, in order to preserve the country’s environment and culture. In the place of tourism and modern technology they choose to conserve the traditional lifestyle of the Bhutanese people and it is this that makes it such a mysterious and fascinating destination.

Bhutan is a peaceful country with great respect for the natural beauty it has been blessed with, and a highly religious culture. Steeped in ancient customs, the country teeters on the brink of modernity – nowhere else will you see traditionally dressed monks transcribing sacred Buddhist texts onto apple mac laptops, with television introduced as late as 1999.

With its beautiful, highly preserved cultural identity, a visit to Bhutan offers you a glimpse of another way of living, and a way of travelling that is unique in this day and age.

Bhutanese history traces back to AD450. Guru Rinpoche is believed to have brought Mahayana Buddhism to the area from Tibet during the eighth century. It first became a coherent political entity around the 17th century, under the direction of Tibetan lamas who established an administrative and political structure. Since that time Bhutan has never been conquered or ruled by another foreign power.

However, in 1910, the British government took control of Bhutan’s foreign affairs, while agreeing not to interfere with the internal ruling.

In 1947 and 1949, it was agreed that the Indian government would advise Bhutan on external relations. Trade agreements with India, essential to sustain the Bhutanese economy, have been the subject of regular rounds of negotiation.

Bhutan has been used by as a base for guerrillas from Assam and Bodoland as they try to gain independence from northeast India. This has affected relations with India and Buthan has turned to China on occasions such as the Non-Aligned Movement and the UN General Assembly, which Bhutan joined in 1971.

Buthan has two main ethnic groups: Nepalis and Drupka. Many of these people are in refugee camps in Nepal as their citizenship is in dispute and the Buthan government refuses to take them in. This is because the main challenge to the Bhutan regime is from Bhutan People’s Party (BPP) who are mainly made up of illegal Nepalis.

After centuries of absolute monarchy, Bhutan became a constitutional monarchy and held its first democratic elections in 2007. Despite this new democratic system the people still retain enormous respect for the royal family.

The absence of modern technology and limited contact with the outside world does not seem to be posing a problem for the Bhutanese, who are judged to be the happiest nation in Asia and the eighth happiest in the world.

The official language of Bhutan is Dzongkha but a large number of dialects are spoken, mainly as a result of the isolation of many sparsely populated villages. English has been the official language for education since 1964 and is widely spoken. The state religion is the Drukpa sect of the Kagyupa, making it the last surviving Mahayana Buddhist kingdom. Although about 25% of the population are Hindu, it is Buddhism that has shaped the countries history and which plays a vital role in the daily life of the people.