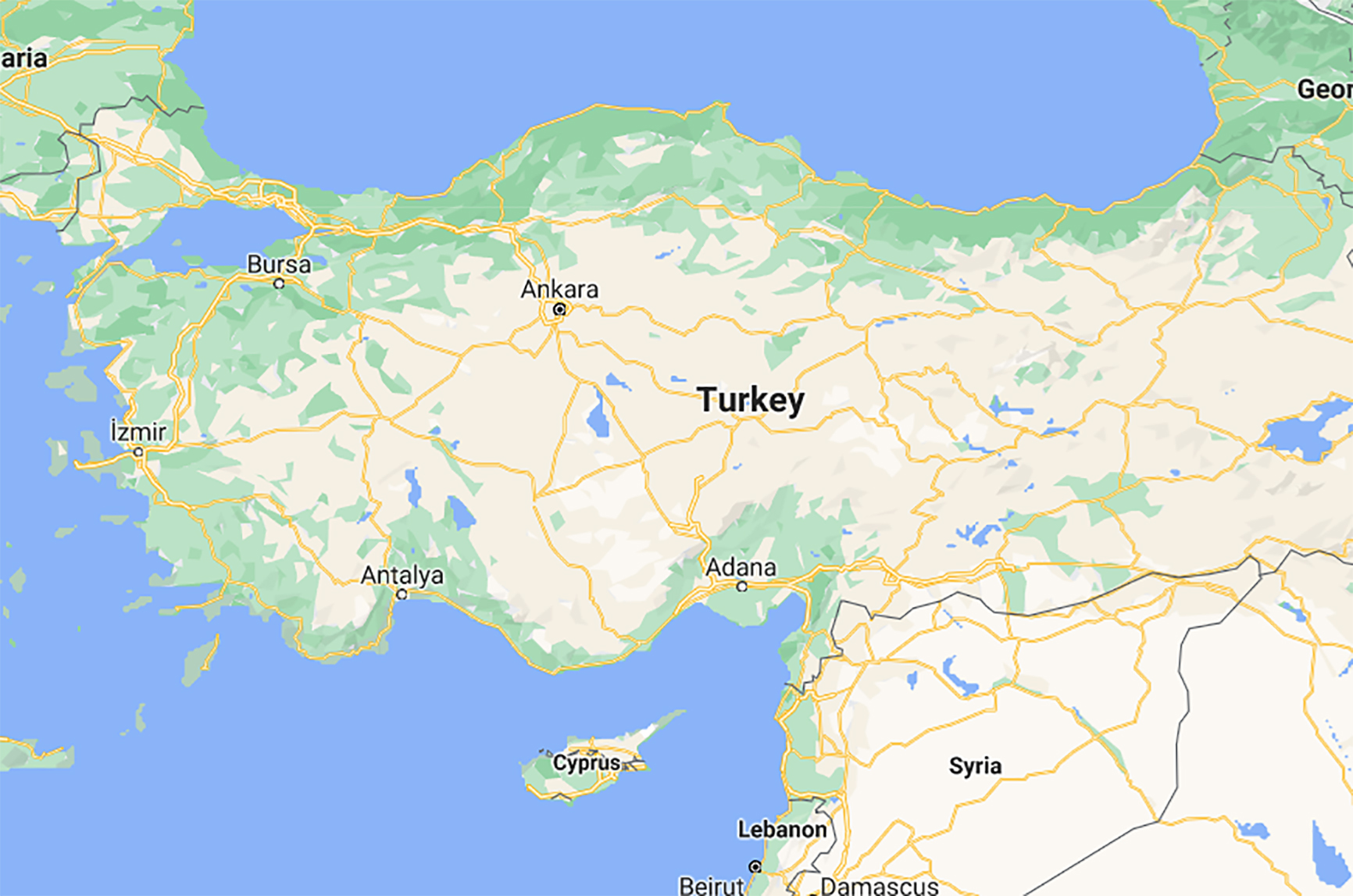 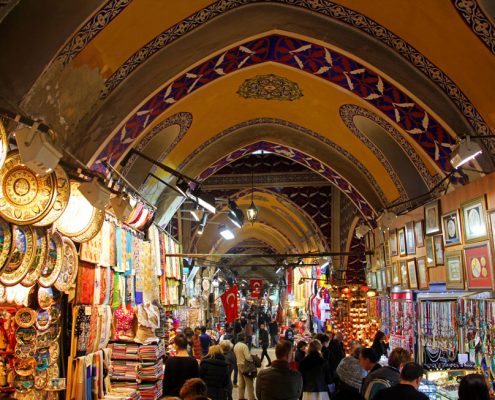 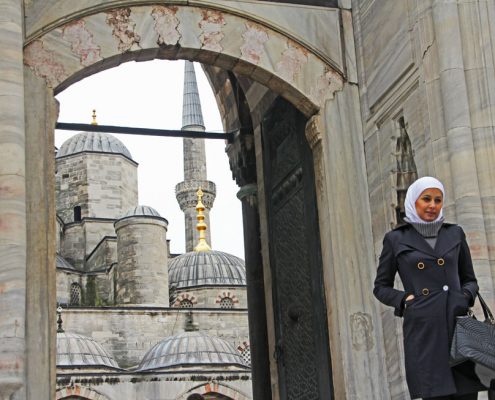 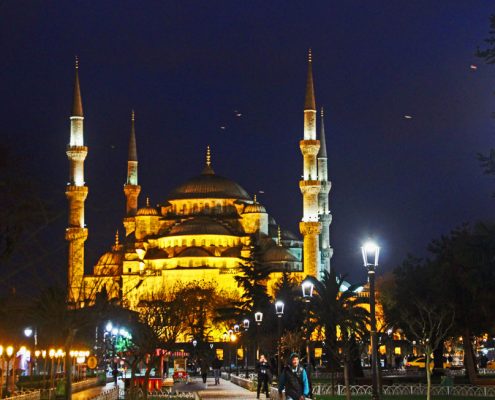 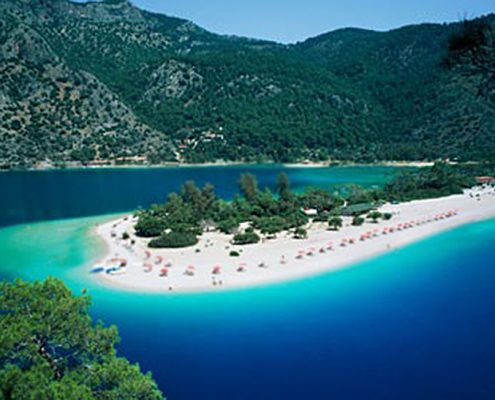 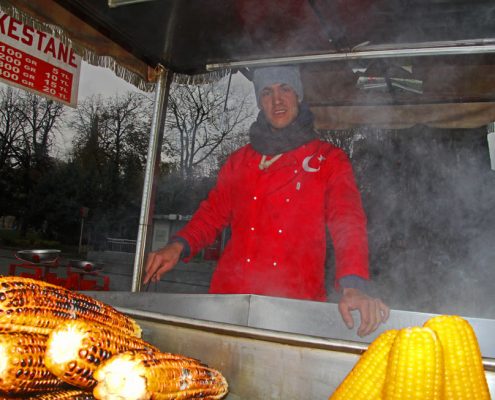 Turkey borders Georgia, Armenia, Iran, Iraq and Syria in the East. It forms a long wide peninsular which is surrounded by the Black Sea, the Aegean Sea and the Mediterranean on three sides. Two mountain ranges run from West to East, the Black Sea Mountains and the Taurus which converge in a huge mountainous region in the east of the country where the two ancient rivers, the Tigris and the Euphrates originate.

Temperatures in Ankara very between- 4°C (25°F) and 30°C (86°F)- Marmara and the Aegean and Mediterranean coasts have a typical Mediterranean climate with hot summers and mild winters.

Istanbul is a lively, bustling city combining magnificent mosques and palaces with the vibrant, colourful bazaars of present day commercial life. Many important historical sites can be found along the coast of the Aegean amongst which are Ephesus (don’t miss the Temple of Diana) and the remains of the ancient city of Troy. The Black Sea Coast has rugged mountains and a wild beauty distinct from the rest of the country. The Central Anatolian Plateau where dwellings hewn from the soft volcanic rock can be found and a landscape of rock and cones, pinnacles and ravines give the area an almost surreal look. The Eastern Provinces boast beautiful fertile valleys, lakes and waterfalls and snow capped mountains. It also has many fine mosques, palaces and monuments and was for many centuries one of the eastern bastions of Byzantium. Dalaman is well known for its tranquil atmosphere. Along the Dalyan River you will find the Iztuzu Beach – well known for its rare breeding of sea turtles.

The Turkish landscape encompasses a huge variety of geographic zones from high snow capped mountains to warm fertile valleys, from the pleasant climate of the Mediterranean coast to the hot dryness of the desert. Its fascinating history pervades every corner of the country and is integrated in modern day Turkey. It boasts a wealth of history and culture stretching back thousands of years, diverse landscapes and people who are proud to share their natural inheritance with the visitor.

Indulge in a pampering afternoon at a hammam, come out feeling squeaky clean and in need of a strong Turkish coffee to get you back on your feet and exploring – Turkey’s position at the crossroads of east and west make it a true melting pot of cultures and civilisations. This country really does have a little bit of everything to offer: a mezze of delights to keep you entertained for weeks.

Turkey’s rich and fascinating history dates back 9000 years. The region cradled the Hittite kingdom which rose around 2200 BC, ancient Troy, and the Greek city-states which rose along the coasts during the first millennium BC. Their struggle with the Persian Empire ended with the conquest of Persia by Alexander the Great. Alexander’s empire broke up after his death, and by the 2nd century BC the region was conquered by Rome.

In the third century AD, Emperor Constantine I moved the Roman capital to Byzantium, strategically located on the Bosphorus, renamed it Constantinople (after himself), and imposed Christianity on the Empire. The Seljuk Turks began to migrate into Anatolia (eastern Turkey) in the 11th century AD and were followed by the Ottoman (or Osmanli) Turks, named after their leader, Osman. In 1453 Constantinople fell to Sultan Mehmet II. His successors expanded the Ottoman Empire further, and at its peak, their empire extended from the Balkans as far as the Red Sea and the Nile.

Disastrous defeats in the Balkan Wars of 1912-13 and WW1 (1914-18) led to the collapse of the Ottoman Empire. In 1923 the secular Republic of Turkey was created with Kemal Ataturk as its first President, and a tragic population exchange took place, with more than one million ethnic Greeks leaving Constantinople, Izmir and other towns and villages for Greece, while around half a million Turkish Muslims returned to Turkey from Greece. Ataturk is the revered father of modern Turkey, and he and his successors were determined modernisers.

Turkey remained neutral during the Second World War, but in the post-war years the army intervened in national politics several times to overthrow democratically elected governments of which it disapproved. In 1974, Turkey and Greece came close to war over Cyprus, and the lingering problems relating to this conflict are the biggest obstacle to Turkey joining the European Union. Modern Turkey is a stable, secular, pro-Western democracy, and sees its future as part of Europe.