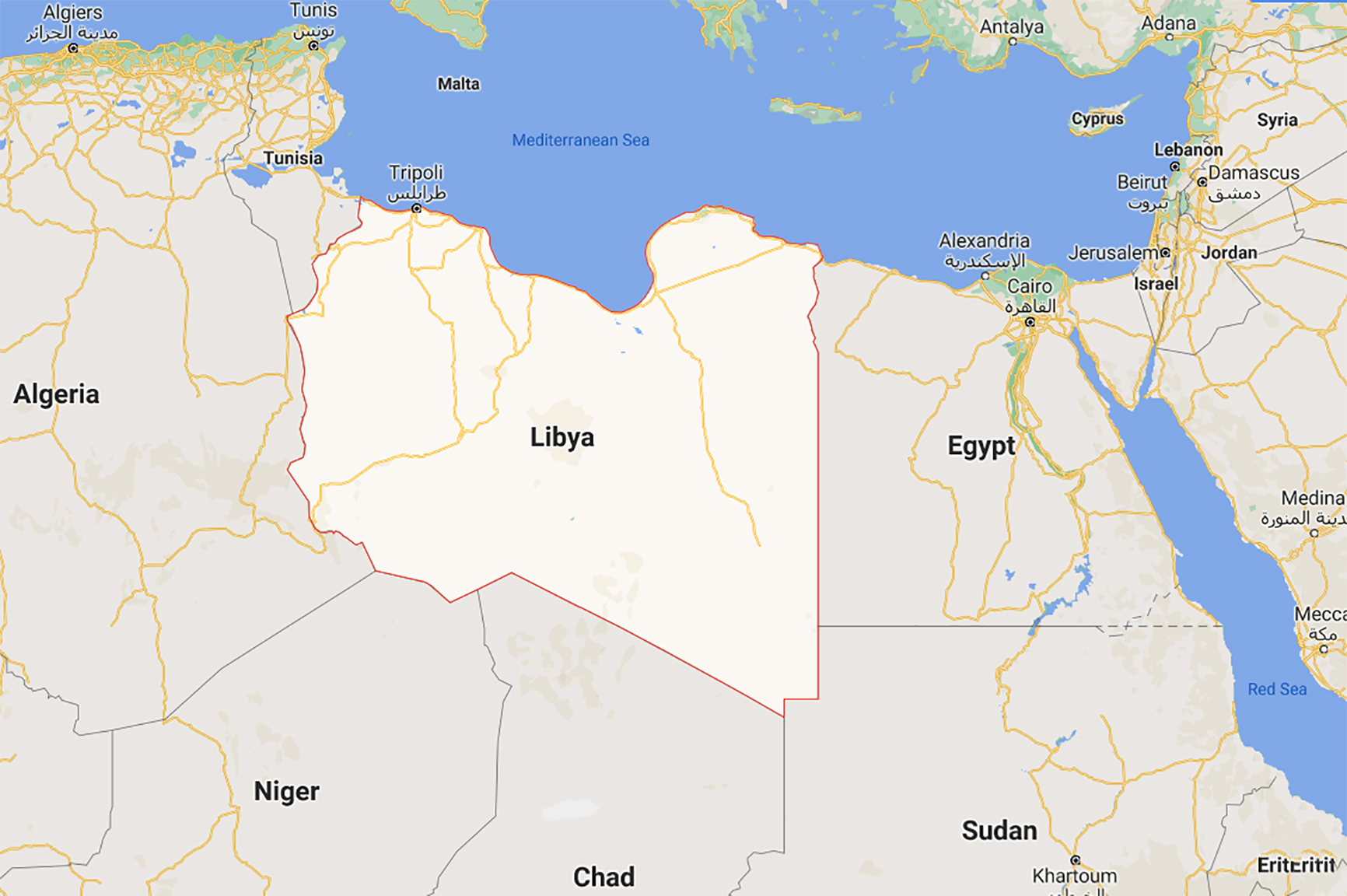 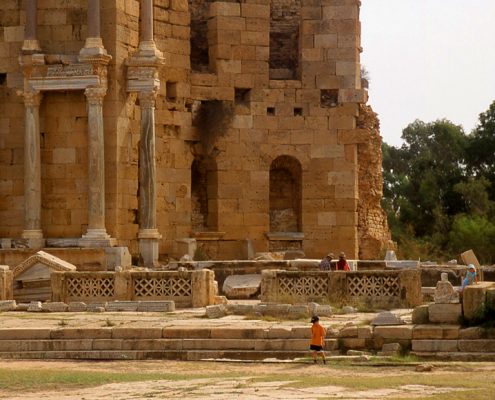 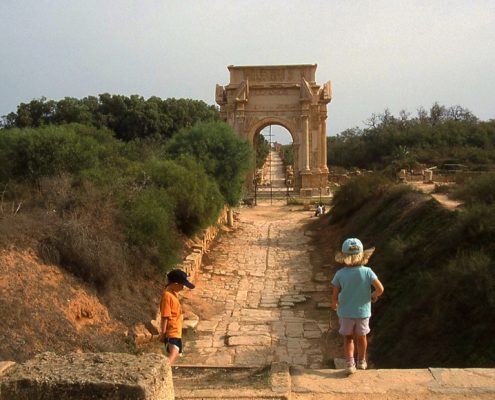 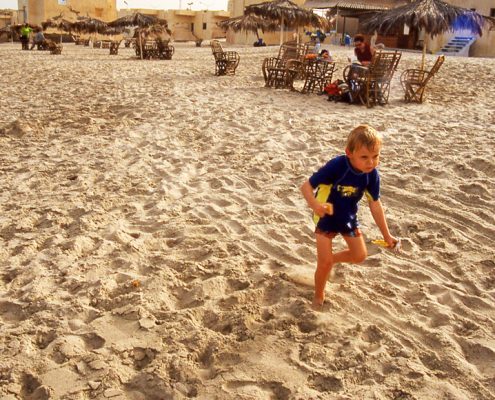 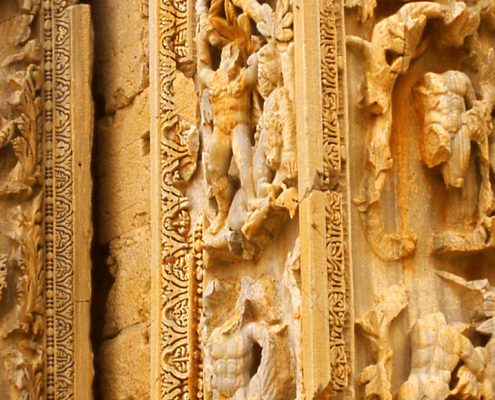 Libya runs from the Mediterranean to the Sahara and is the fourth largest country in Africa. It is bordered by Egypt and Sudan to the east, Algeria and Tunisia to the west and Niger and Chad to the south. The Mediterranean coastline runs for 1,770 kilometres while 93% of Libya is covered by desert.

Agriculture is developed in 1% of the land in the northwest of the country and there are no permanent rivers. The south of Libya has some small mountain ranges with the highest peak reaching 3,376 metres.

Coastal regions benefit from a Mediterranean climate with summer temperatures of approximately 30 degrees accompanied by high humidity and winter lows of 10 degrees, but as you head inland and south the climate becomes hotter and drier increasing in temperature to as high as 50 degrees in the far south. In the spring the ‘ghibli’, a hot, dry, sandy wind may last for a few days in northern Libya. Visits to the desert are not recommended between mid-May and October due to the dangerous daytime heat.

Libya’s major highlights including the five Unesco World Heritage sites are divided into two distinct categories: the extraordinary Greek and Roman cities and the spectacular diversity of the Sahara.

On the north coast Tripoli is a lively city with an ancient medina and fascinating museum, Leptis Magna and Sabratha on either side of Tripoli are some of the best preserved Roman cities in the Mediterranean and further east lie the Greek ruins of Cyrene and Apollonia. Nearby Qasr has some exceptional mosaics while Benghazi is a pleasant city with a bustling souk and Italian architecture.

Heading south into the Sahara the ancient Berber villages of Jebel Nafusa are well worth visiting en-route to Ghadames. Ghadames is arguably the finest old city in the Sahara famous for its trans-Saharan caravan trade. Further south the ancient town of Ghat has a mud brick medina and is gateway to the mountain range of Jebel Acacus where the desert scenery is spectacular and the rock art and ancient carvings are magnificent.

More examples of spectacular desert scenery are the Ubari Lakes surrounded by the sand dunes of the Idehan Ubari (Ubari Sand Sea).

Finally emerging from relative isolation, Libya exploded into international consciousness in the early 2010s due to civil unrest. Despite recent difficulties, Libya is a wonderful country to visit, the land where Africa meets the Mediterranean in a fascinating fusion of cultures and ancient histories.

The Sahara desert is vast and infinitely beautiful. With expanses of sand the size of small countries, the peace of the magnificent dunes is more easily accessible from Libya than any other country, and it is truly not to be missed.

Away from the desert, the coastline boasts the spectacular remains of ancient civilisations, both Greek and Roman. Sample exquisite seafood in serene white-washed Tripoli and snack on an abundance of dates, oranges, apricots, figs and olives.

Throughout history, Libya has been a crossroads of empires lying in the path of invading enemies from Europe and the Middle East. The Romans, Greeks, Byzantines, Arab-Islamic and other empires of the Sahara have all left their mark in the form of monuments and cultural influences on Libya over thousands of years.

The Berber culture dominated in the mountain lands between the Mediterranean and the Sahara and this continued to thrive even after the arrival of Islam in 642. The Berber people largely accepted this new religion but put up strong resistance to the Arabisation of the region. They were finally forced out of their traditional homeland in the 11th century but to this day they have left fascinating insights into a traditional way of life.

Libya was occupied by countless forces until after World War II when the United Nations General Assembly finally granted independence to the country in 1951. The United Kingdom of Libya was formed with King Idris as its monarch. In the fifties Libya concentrated on building state institutions and rebuilding its economy. Treaties were signed with Britain, the USA, France and Italy. In 1959 an oilfield was discovered in Cyrenaica and thus began the transformation of Libya from an economic backwater to one of the world’s fastest growing economies.

By 1967 unrest in Libya was widespread and the people’s anger was turned on the government and monarchy. On 1st September a group of military personnel seized power to very little opposition. One week later a young colonel named MU’ammar Gadaffi became leader of the country. He spent his long years in office in pursuit of unity between Libya and its Arab neighbours in spite of numerous assassination attempts by militant Islamic groups. More recently he shifted his focus to Africa. In 1999 Gadaffi unveiled his plans for a United States of Africa and in February 2001 41 nations signed the Constitutive Act of African Union which replaced the Organisation of African Unity.

Until recently the government was made up of a system of people’s committees as explained in Gadaffi’s ‘The Green Book’. This pyramidal system has at its base committees to which every Libyan citizen over 16 years old belongs. There was no formal head of state although no decisions could be made without the approval of Gadaffi who adopted the title of Leader of the Revolution. The main question in the minds of most Libyans and their neighbours was, for a long time, what happens after Gadaffi?

The answer came in Spring 2011. After popular movements overturned the leaders in neighbouring Egypt and Tunisia, unrest in Libya and other Arab states reached a new height. After peaceful protests in February were met with violence from Gaddafi, the protests escalated into an uprising the spread quickly throughout the country. An ongoing armed conflict between forces loyal to Muammar Gaddafi and his longstanding regime, and those seeking on depose him continued until August 2011 when rebel fighters entered Green Square, renamed Martyrs’ Square.

The Libyans voted in their first parlimentary elections since the end of Gaddafi’s rule in July 2012. Power was handed over to the General National Congress who formed an interim government and started to draft a new Libyan Constitution.

Mohamed al-Magarief had been elected to head the General National Congress in 2012 however was forced to step down when parliament approved a law debarring officials of the Gaddafi period from office. Nouri Abusahmen was elected chairman in June 2013 and is the current de facto head of state. Interestingly he is a member of the ethnic Berber minority that suffered discrimination under Gaddafi’s rule.

We all hope a period of peace will continue for the country to rebuild itself.