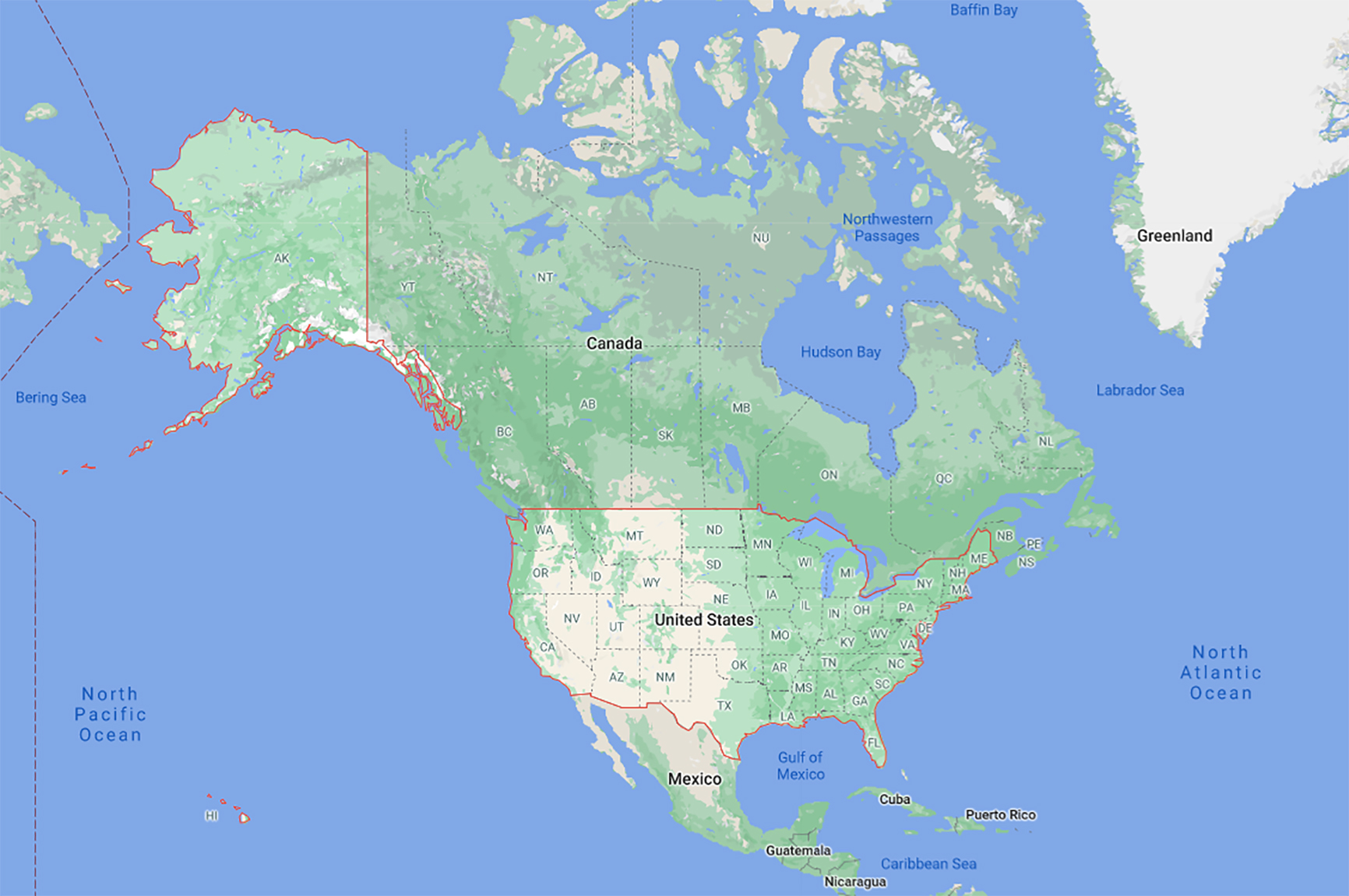 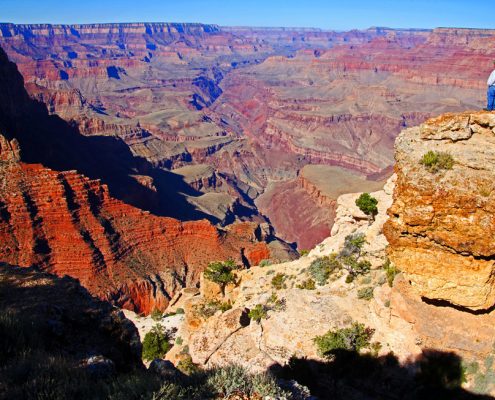 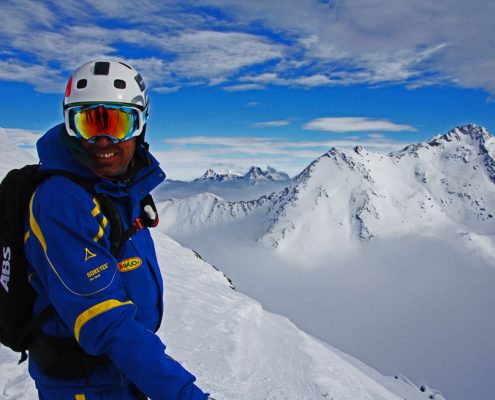 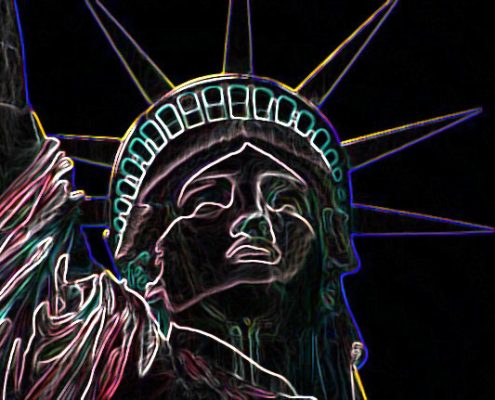 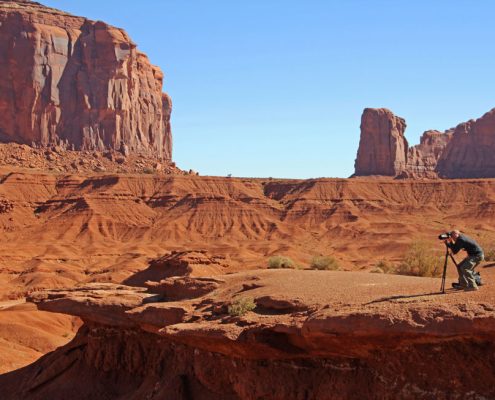 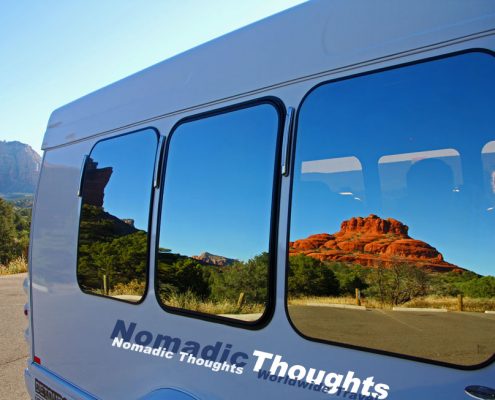 The United States of America, comprising 50 individual states, covers a large part of North America and borders with Canada to the north and Mexico to the south. It is also the third largest country in the world (after the Russian Federation and Canada) and has coasts on the Atlantic, Pacific and Arctic oceans, together with the Caribbean Sea and the Gulf of Mexico. The land area of the contiguous United States is approximately 1,900 million acres (7,700,000 km2). Alaska, separated from the contiguous United States by Canada, is the largest state at 365 million acres (1,480,000 km2). Hawaii, occupying an archipelago in the central Pacific, southwest of North America, has just over 4 million acres.

Its landscape is incredibly diverse, with mountains, plains and coastal areas. There are both densely populated cities and sparsely populated rural areas.

The climate varies enormously ranging from tropical (Hawaii) to arctic (Alaska), with the best times to visit depending upon both the location and the season. The cooler, more comfortable times to visit are generally Spring (March – May) and Autumn (September and October).  Although the summer months are generally hot regardless of the region, winter temperatures (November – February) can vary considerably; the northern States are much colder than the southern States.

Alaska, the largest State in the country offers a vast array of ever changing scenery with stunning glaciers, waterfalls, rives, fjords, meadows, forests and tundra. On the other hand, New York, ‘The Big Apple’ – originally first settled by Dutch colonists more than 350 years ago, offers visitors approaching from the sea a dramatic skyline of soaring skyscrapers. It is also the world’s third largest city, and the country’s most cosmopolitan. California is known as the ‘Golden State’ because of its sunny climate and the discovery of gold during the pioneering days; a blend of beaches, mountains, rugged coastline, Hollywood, glamour, desert, woodland and orchards. It is the most populous state in the USA, its major tourist destinations being Los Angeles, San Francisco, San Diego and the lush resorts of Santa Barbara and Palm Springs.

Nature-based attractions include the famous Redwood National Park in San Francisco which lies between Eureka and Crescent City
– it has 23,472 hectares of redwood forest and dramatic coastline. Yosemite National Park, home to Giant Sequoia trees (the largest living things on the planet), is located in California and covers almost 1,200 square miles. Another popular natural attraction is The Grand Canyon, and rightly so – nowhere else does nature present such a compelling and expansive natural panorama. Don’t miss the volcanic activity and wildlife at Yellowstone National Park, nor the glitzy casinos in Las Vegas.Hawaii’s famous surf and lush rainforests are a must if you have time to get away from the mainland. America has plenty to offer – from man-made to natural attractions, the choices are endless!

Before Columbus landed in North America in 1492, the continent was inhabited by peoples thought to have been descended from nomadic Mongolian tribes. The first wave of European settlers, mainly English, French and Dutch, travelled across the Atlantic in the 17th century and colonised the Eastern Seaboard. Restrictions on political rights and the punitive taxation imposed by the British government ultimately led to the American War of Independence (1775–1783), and the Declaration of Independence was signed in 1776. A period of further settlement, purchases of land from the French and Spanish, and annexation of Indian and Mexican territory ensued.

By 1853, the current boundaries of the United States, with the exception of Alaska and Hawaii, had already been established. Economic activity in the southern States centred on plantation farming dependent on the slave trade. Abraham Lincoln’s attempts to put an end to slavery were fiercely opposed. His presidency in 1861 precipitated a political crisis in which seven southern States (joined later by three others) seceded from the Union, sparking the American Civil War. The more powerful and better equipped Union forces prevailed over the rebel Confederacy after four years of fighting. Once peace had been restored, the country entered a period of consolidation, building up an industrial economy and settling the large central region of the country known as the Midwest.

The mid- and late nineteenth century also saw American foreign policy emerge and mature: formal diplomatic and trading links were established with old European powers; and the USA sought to assert its dominance in the Americas. US intervention in the First World War proved decisive for the Allied forces and heralded the country’s emergence as a global superpower.

Driven by free-market economics and innovative developments in technology and production – notably the growth of the motor industry – the US was by this point the world’s largest economy.

The Second World War saw the emergence of nuclear weapons and a superpower conflict that was to dominate international relations for many years to come. At the heard of post-war US foreign policy was resistance to the spread of communism. The Korean War of the 1950s, the ill-fated Vietnam War and conflicts in the Middle East have all seen the engagement of US troops while many other countries have had military forces discreetly financed by the United States. Relations between the USA and the former Soviet Union improved greatly after 1985 thanks to the new Soviet foreign policy adopted by the Gorbachev government.

The September 11th terrorist attacks in 2001 claimed over 3,000 lives, and were to be a defining moment in US history. The impact on the American people and its body politic was immeasurable. Then President Bush immediately despatched a considerable forces in retaliation against the perpetrators: the al-Qaeda movement headed by Osama Bin Laden, and its hosts, the Taleban regime in Afghanistan. Thus began the so-called War On Terror.

The Taleban were combatted within weeks. Some senior al-Qaeda personnel were captured, including the supposed organiser of the 9/11 attacks, but others, including Bin Laden himself, escaped capture. The Bush administration then turned its sights upon Iraq’s Saddam Hussein and his regime. With the support of Britain and others, the Americans used the alleged existence of weapons of mass destruction to justify invading Iraq. Following the invasion in 2003, no such weapons were found, causing much political embarrassment. National security remains a major issue for the USA.

The November 2008 electrion saw a record turnout and victory to Democrat candidate Barack Obama, who was subsequently voted in for a second term in office.