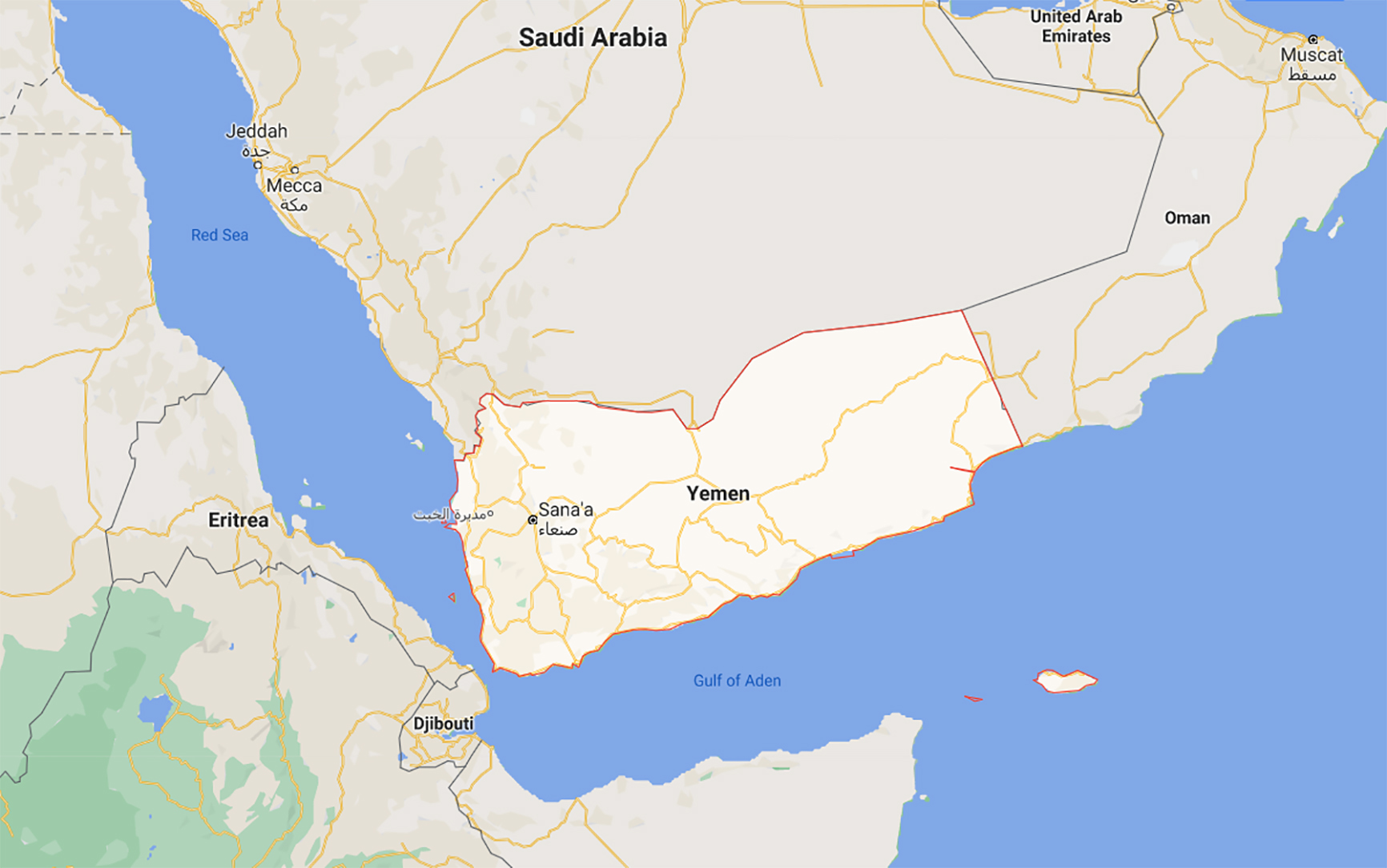 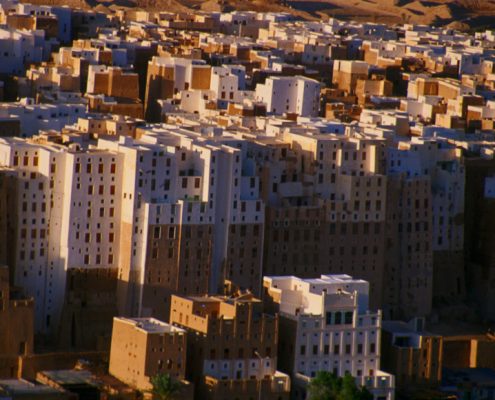 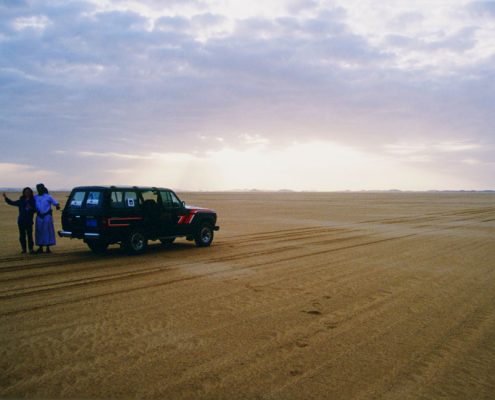 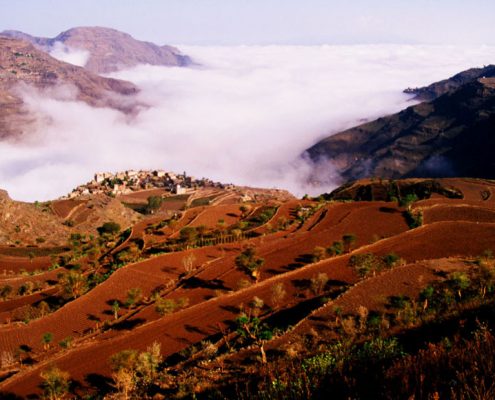 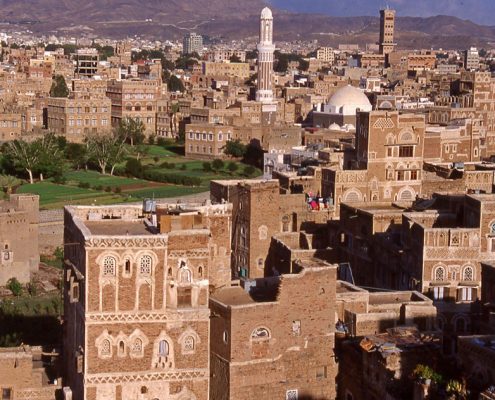 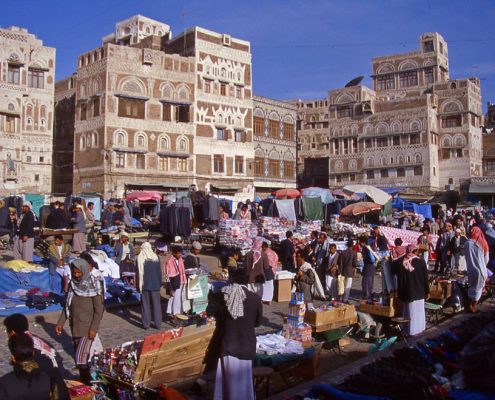 The Republic of Yemen shares borders with Saudi Arabia and Oman, and gives way in the south to the Gulf of Aden and the Red Sea in the west, in which the islands of Perim and Karam are located. Yemen has largely mountainous terrain, which lends itself well to terraced agriculture. The Hadramaut is a high mountain range in the centre of the country with steep peaks ranging in height from 200m to the 4000m Jabal Nabi Shoveb peak. In contrast Tihama is a flat semi-desert coastal plain in the west. Surface water flows down from the mountains through the valleys during the rainy season, and the land is farmed for cotton and grain. In the east the mountains drop away to the Rub al-Khali, known as the ‘Empty Quarter’ of the Arabian Peninsula, a vast expanse of desert sand made famous in the west by Wilfred Thesiger’s epic account of his journeys in the area, before oil was discovered.

The climate varies according to altitude. The coastal areas are hot and dusty throughout the year. The highlands are warm in summer, while during winter, from October to March, nights can be very cold on the slopes. Annual rainfall is extremely low and temperatures are generally very high. The most pleasant time to visit is from October to April.

Sana’a lies in the Central Region of Yemen, an area that has been intensively cultivated for centuries and is the site of many of the major towns – it is the modern capital and has long been an important citadel along the trade route between Aden and Mecca. The Great Mosque of Sana’a is one of the oldest in the Muslim world, constructed in the time of Mohammed and enlarged in 705 AD. The vast Wadi Hadhramawt, running from East to West is the biggest wadi in the Arabian Peninsula and is very fertile supporting agriculture and goat herding. Shibam on the other hand is the most celebrated Arabic Islamic city built in traditional style. It is the Manhattan of the Arab world, being made up of some 500 skyscrapers which are 5 to 7 storeys high. Ta’izz lies in the south of the country at an altitude of 1400m. Beautiful old houses and mosques remain within the line of the 13th century city wall, which is still intact along the southern side. Aden is mentioned in the Biblical book of Ezekiel (c. 6th Century). Crater, the oldest part of the city, lies in the crater of an extinct volcano and is where the most ancient constructions of Aden can be seen.

Yemen is the least known and in many ways the most spectacular country in Arabia. It offers the visitor striking scenery, much of which is mountainous, spectacular Islamic and pre-Islamic architecture and friendly people with huge pride in their history. It boasts both the world’s oldest city and the world’s hottest. The Old City, now a UNESCO World Heritage Site, is deeply romantic with its narrow winding streets, and has remained largely unchanged for hundreds of years.

The souk is an assault on the senses, with the rich aromas of famed Arabian spices and incense, fresh unleavened bread and the bright wares of hundreds of noisy street traders. Early evening is truly magical, when the sun is setting on the date plantations, the alabaster windows glow in the setting sun and Yemenis chew qat on colourful cushions in their precariously top-heavy homes. Then Yemen is a place like no other, and one that is wonderfully rewarding to travel in.

Yemen, named ‘Arabia Felix’ or ‘Fortunate Arabia’ by the Romans, has often found itself as the meeting point of the Mediterranean and the Far East in terms of trade, culture and history. It was situated at the cross-roads of the spice, incense, myrrh and gold routes with trade traversing the Red Sea into Egypt or the ancient kingdom of Ethiopia and vice versa. The flourishing kingdoms of Saba, Qataban, the Jewish Kingdom of Himyar, and Hadramout mark the ancient history of Yemen which comes to an end with the temporary Ethiopian and Persian invasions.

The Medieval Period commences with the Islamisation of Yemen. Then, before the arrival of the Turks, there is a rapid succession of States and Kingdoms, including those of the Zabid, Jibla and Saada. The Turkish Occupation lasted from 1536 to 1638 and – in the northern regions only – from 1872 to 1918, while Aden in the South was occupied by the British in 1839.

Northern Yemen, independent since 1918, was ruled by the Imams up to the revolution in 1962 when it became the Arab Republic of Yemen. Southern Yemen was a former British protectorate obtained its independence in 1967 and was named the Democratic People’s Republic of Yemen. In 1990 the two parts merged to form the Republic of Yemen with Sana’a as political and Aden as economic and cultural capital. Yemen is still very much a traditional, largely agricultural country with several thousand Yemenis dependent on fishing. There is still a nomadic minority living along the northern edges of the desert.

In early 2011, as part of the so-called ‘Arab Spring’, an uprising against the government broke out, and clashes with police and pro-government supporters steadily intensified. Many protestors demanded the immediate resignation of the leadership, and in particular that of President Ali Abdullah Saleh, who declared he would not seek another presidential term in 2013. After an assassination attempt in June 2011, Saleh fled, injured, to Saudi Arabia. Power was handed over to Vice President Abdu Rabu Mansur Hadi, with little change in policy. As protests continue the world’s keen interest in the Middle East only increases, and we watch to see what the newest development will be.