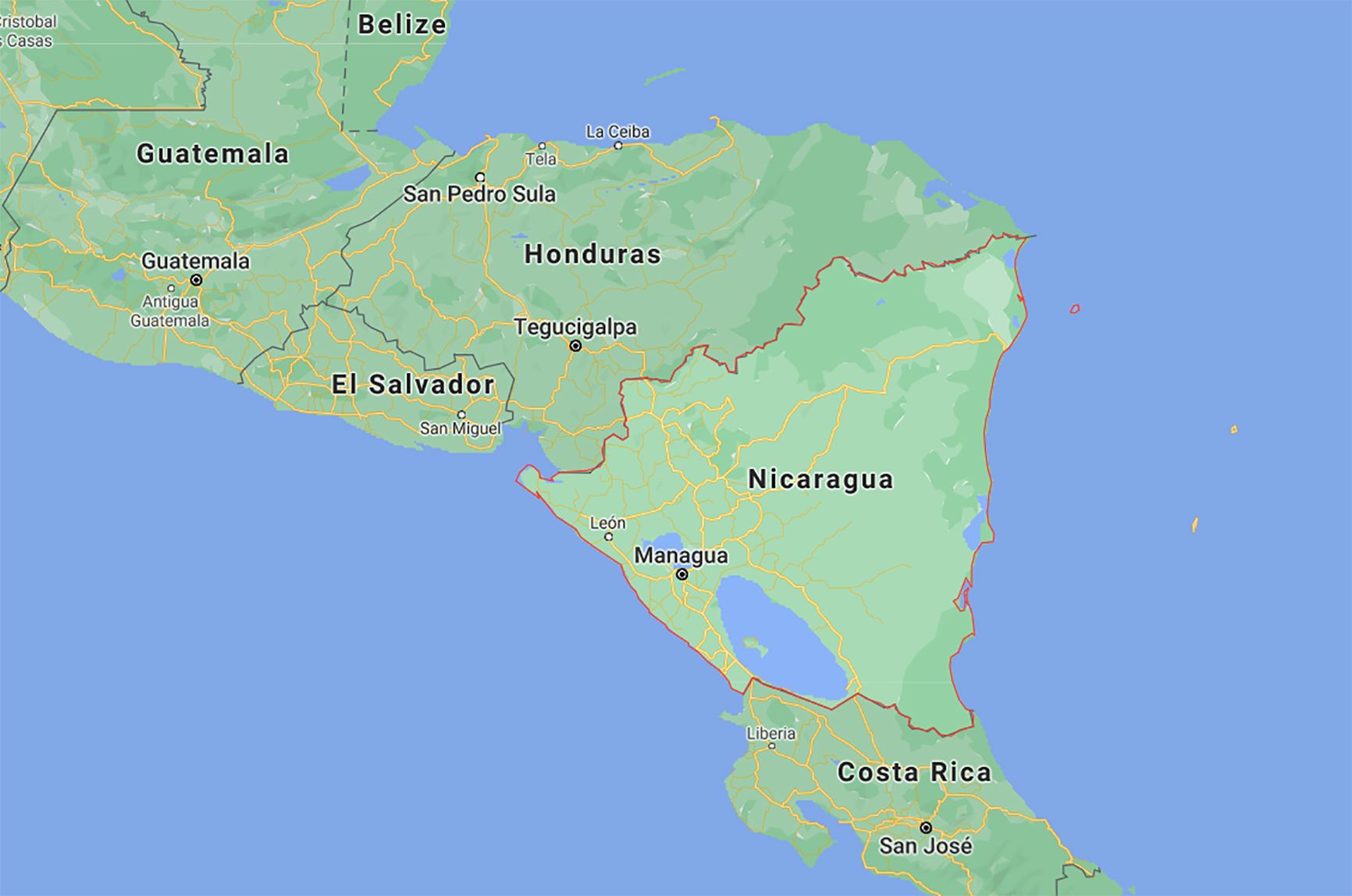 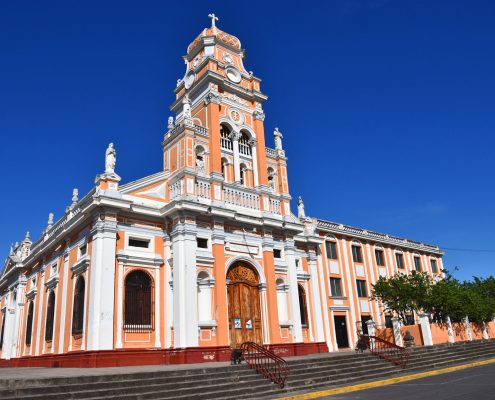 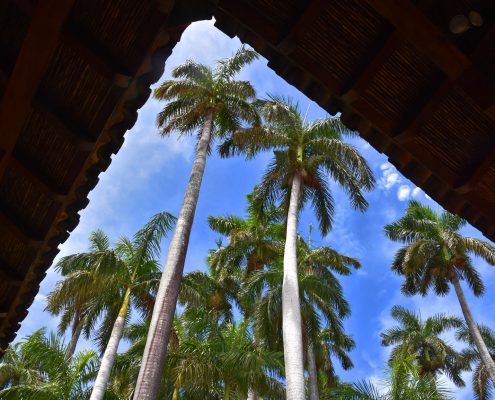 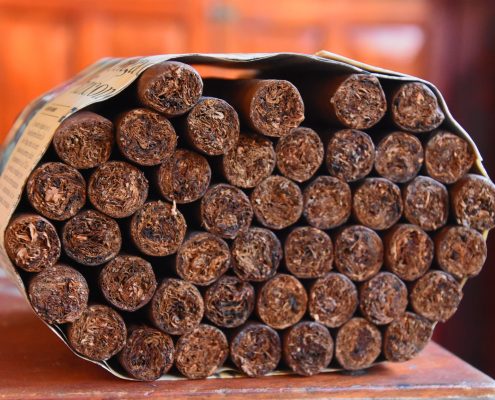 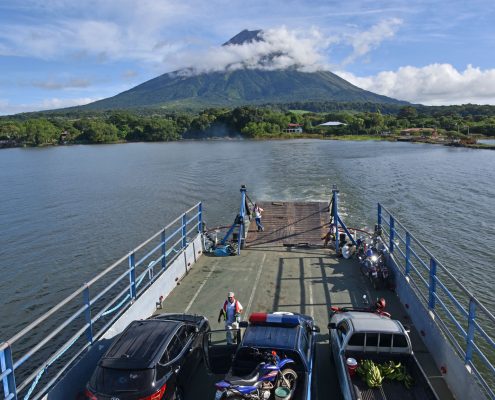 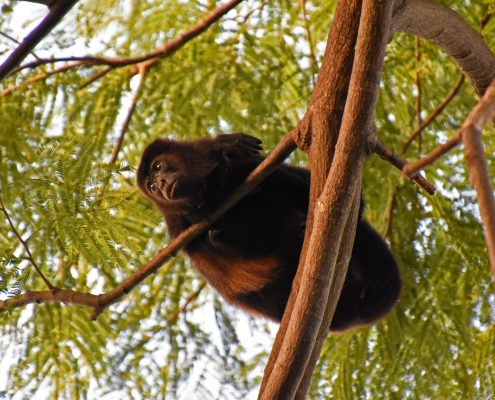 Nicaragua is the largest Central American republic and is the same size as England and Wales with 541 km of coast on the Caribbean and 352 km on the Pacific. Managua, the capital, is located on the shores of Lake Managua. The volcanic southern highlands are a popular tourist destination along with Lake Nicaragua (the largest freshwater lake in the world) and the unspoilt Corn Islands on the Caribbean coast. Lakes Nicaragua and Managua are connected by the Tipitapa River. The Caribbean coast otherwise known as the “Mosquito Coast”is while the Pacific coast is volcanic and very fertile.

Nicaragua is fast developing as an exciting eco-tourism destination with stunning deserted beaches, a huge variety of birds and wildlife, hiking in pristine rain and cloud forests and up volcanoes each with their own flora and fauna, river exploration in boats, swimming in the clear waters of Somoto Canyon Canada and many water-based activities in the ocean and inland. The Corn Islands offer turquoise waters, palm-fringed beaches, stunning coral reefs and a relaxed vibe. Managua, the capital offers culture and reminders of Nicaragua’s turbulent history whilst Granada, located at the foot of the Mombacho volcano has beautiful colonial buildings and churches. León is the intellectual capital of Nicaragua, containing a university, religious colleges, the largest cathedral in Central America and several colonial churches. Colourful, provocative and revolutionary graffiti graces the city walls, and the whole of the city is charged with an artistic buzz.

As early as 1519, the Spanish Conquistadores reached the lowland from Panama.  They discovered an area located on the south-western shores of Lake Nicaragua that was comparatively densely inhabited by peaceful Indians who lavished gold ornaments on them. Colonies at Granada and Leon were founded some 5 years later but most of the Spaniards moved elsewhere when the flow of gold dwindled. Both colonies were placed under the jurisdiction of Guatemala in 1570. Leon was chosen as the capital, despite being economically inferior to Granada, subsisting on crops of maize, beans and rice compared to the lucrative crops of sugar, cocoa and indigo. Leon’s geographical position was the reason why it was chosen over Granada to be the capital as it was more easily accessible from the Pacific. Later, in 1858, Managua was chosen as the capital as a compromise following violent rivalry between Granada and Leon.

The US has been involved in the politics of Nicaragua over the centuries and in 1909 the Nicaraguan Conservative leaders were helped by US Marines in their successful uprising to overthrow the Liberal president, Jose Santos Zelaya. In exchange for US help in securing a loan in 1911, Nicaraguan Conservative leaders agreed to hand over control of Nicaraguan customs to an American board. The US dispatched Marines to Nicaragua to enforce the control and remained there until 1933. The last five years of American occupation saw a relentless guerrilla war waged against the US Marines by the nationalists under the command of General Augusto Cesar Sandino. This led to American withdrawal in 1933 and President Franklin Roosevelt introduced the ‘Good Neighbour’ policy and pledged non-intervention. The Nicaraguan National Guard, an American-trained force, remained behind, under the leadership of Anastasio Somoza Garcia. In February 1934, General Sandino was assassinated by Somoza’s men and in 1936, Somoza, himself, took over the presidency. He remained in power until he was assassinated in 1956. Both of his sons served a presidential term and General Anastasio Somoza Debayle, the younger of the two, dominated the country from 1963 until he was deposed in 1979. He was later assassinated in Paraguay.

Extensive damage and casualties (estimated at over 30,000) in certain parts of the country, especially in Managua, Esteli, Leon, Masaya, Chinandega and Corinto. were the result of the 1978-79 revolution against the Somoza Government by the Sandinista guerrillas. General Somoza finally resigned on the 17th July 1979 after heavy fighting and the Government was taken over by a Junta representing the Sandinista guerrillas and their civilian allies. In May 1980, a 47-member Council of State was created and following elections for an augmented National Constituent Assembly, held on 4th November 1984, The Sandenista Liberation Front won 61 out of a possible 94 seats. Daniel Ortega Saavedra, who had headed the Junta, was elected President. The failure of the Sandinista Government to meet the demands of The Democratic Coordinating Board (CDN), a right-wing grouping, led to this coalition boycotting the elections.  The US administration, in turn, declared the poll a ‘sham’.

Anti-Sandinista Guerrillas (the ‘contras’) had no significant success in their war against the Government despite substantial official and private US support. The Sandinistas and the contras met in 1988 for the first time to discuss the implementation of the Central American Peace Plan drawn up by President Oscar Arias Sanchez of Costa Rica. The Nicaraguan government made a number of political concessions to comply with the Plan and the contras, following a stream of desertions added to a lack of funds and diminished numbers, appeared to be a spent force.