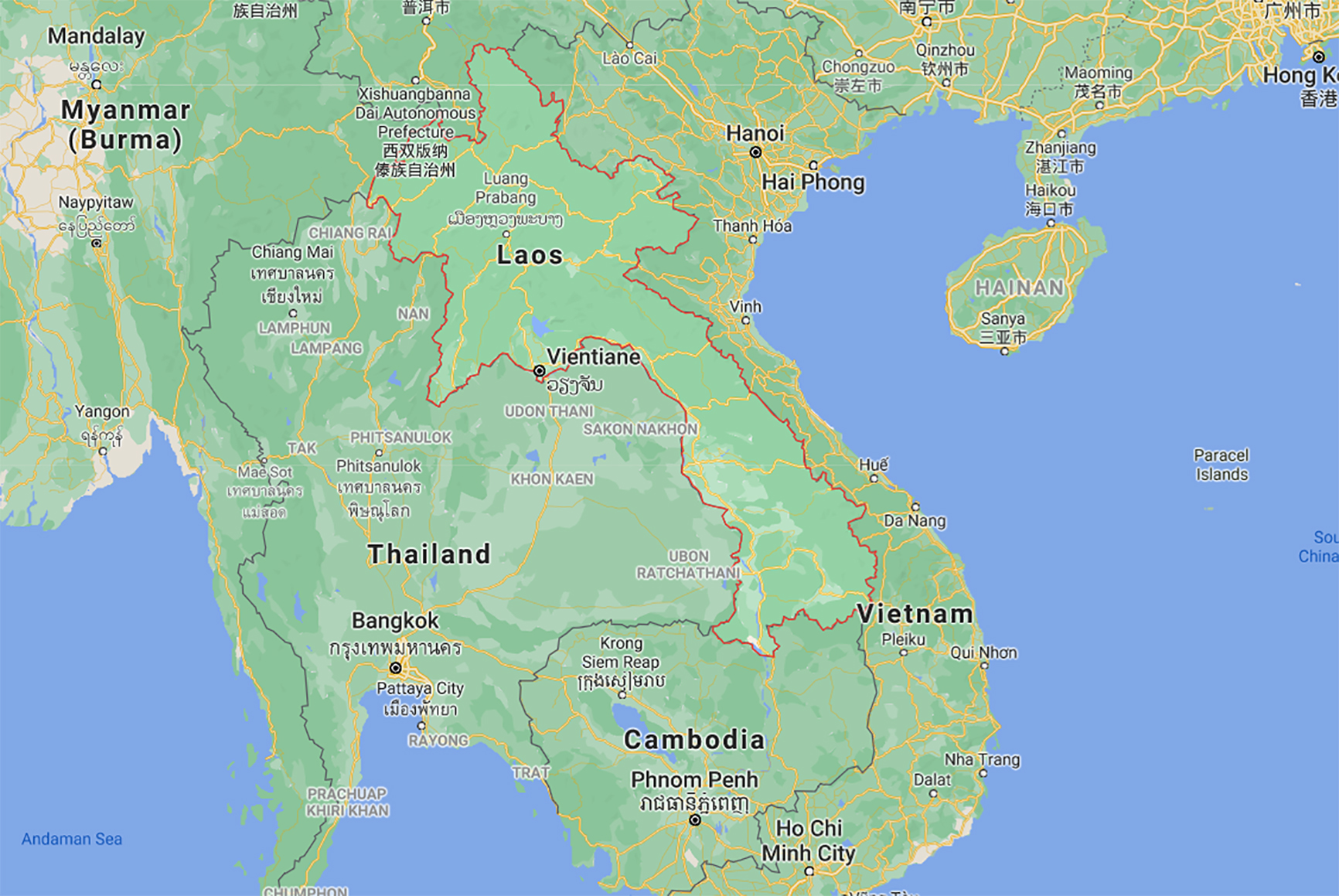 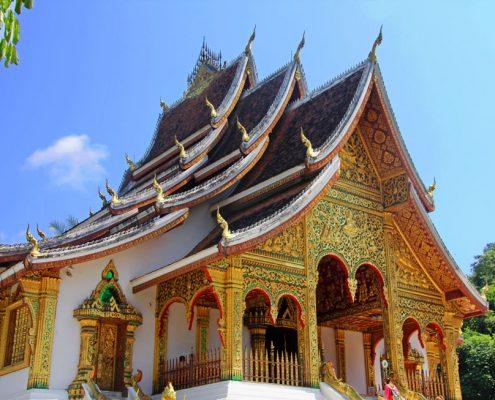 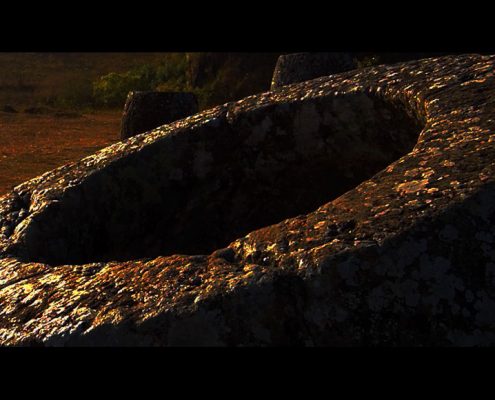 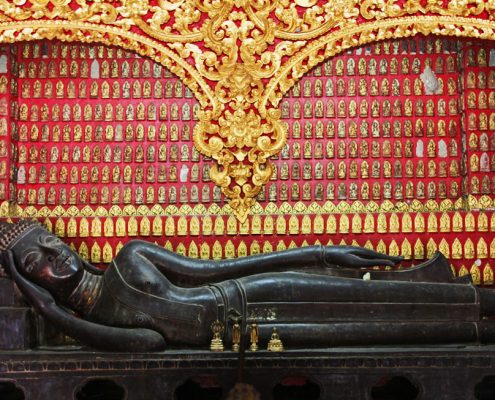 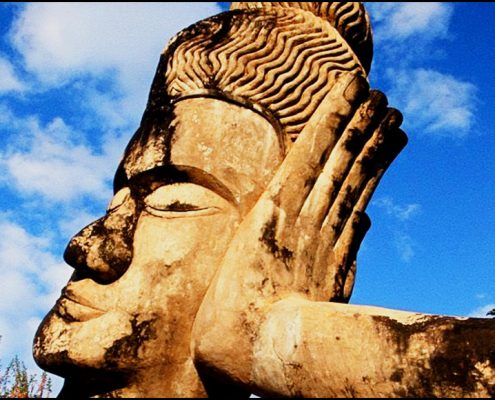 Laos is a landlocked country bordered to the north by China, to the east by Vietnam, to the south by Cambodia and to the west by Thailand and Myanmar (Burma).

Apart from the Mekong River plains along the border of Thailand, the country is mountainous, particularly in the north, and in places is densely forested.

Throughout most of the country the climate is hot and tropical, with the rainy season between May and October when temperatures are at there highest. The dry season runs from November to April.

Things to see in Vientiane, Laos’ capital, include That Luang Stupa, the most impressive stupa in the city, with a central stone structure of over 30m high, and built in 1566. Don’t miss Wat Sisaket, built in 1818 by King Chao Anou and the oldest temple in Vientiane, with a number of unique features including the cloister, the frescos inside the Sim and a reported 6,840 Buddha images.

Wat Phra Keo is the former temple of the Lao monarchy and has been converted into a museum, with excellent exhibits relating to the daily life of Lao Buddhists down the years. Anousavari Monument is situated on one of the city’s major boulevards and is dedicated to all those who died in the years before the revolution. It has a marvelous painted ceiling. The Revolutionary Museum is a distinctive pink building which houses a collection of artefacts including paintings, drums and photographs depicting the history of the 1973 People’s Revolution.

25 km (15 miles) away from the capital is the stone garden of Xiang Khoang.

In the royal palace at Luang Prabang, the former capital of Laos, there is fine artwork, and the visitor can see gifts made to former kings. Nearby, the Phousi in the town centre is a huge rock which visitors can ascend for a panoramic view of the river. Several interesting excursions along the Mekong River are possible from Luang Prabang, including a visit to the Pak Ou Caves where statues of Buddha abound.

Wat Xieng Khean, in Vientiane province near the ferry port to Thailand has an extraordinary temple which should be visited.

In the last twenty years all the joys of Laos have been opened up for the world to see. This is a country whose isolation has meant it has hardly changed for over a century – beautiful architecture perfectly preserved as the capital has been spared modern development. Enjoy a refreshingly laid-back lifestyle in sleepy villages where delicately baked baguettes and croissants are served for breakfast, contrasting sharply with typically Asian hot and spicy dishes later in the day. The cuisine epitomises the cultural diversity in Laos, as do the languages commonly spoken – Lao French, Vietnamese and English as well as tribal languages such as Meo. With something for everyone, a trip to Laos is truly not to be missed.

Laos was occupied during the fourth and fifth centuries AD by Chinese people from the north. It was subject to strong Indian influence from the eighth century onwards and adopted Buddhism. For 200 years from the early 11th century, Laos was part of the Khmer Angkor Empire. It was during this period that the Lao people, who originated in Thailand, invaded the area and displaced the previously dominant Chinese. However, there is some evidence that the Mongol empire had some influence over events in the region in the late 13th and early 14th centuries, probably in alliance with the Angkor kingdom.

Following the collapse of the Khmer empire, the independent kingdom of Lan Xang, which dates back to 1349, was established as a single entity bounded by Siam (Thailand), China to the north, Vietnam and the Mekong river, occupying roughly the same territory as modern-day Laos.

Populated by a mixture of ethnic Laos, Thais and various hill tribes, the Lan Xang empire lasted for three centuries while fighting off successive invasions from Vietnam, Siam (Thailand) and Burma. Internal power struggles in the 18th century were exploited by its neighbours, notably Siam which finally conquered Vientiane in 1779. The city was later destroyed by the Siamese and the remains of Lan Xang absorbed into Siam.

The 19th century was a period of political turmoil in which rival powers with shifting alliances fought for control of the territory. The Siamese were the dominant power until the arrival of the French, who had already established a firm grip in neighbouring Vietnam, in the 1870s. Laos then became part of French Indo-China, which lasted until the 1950s, with the exception of a brief period of Japanese occupation during World War II.

Full independence was achieved in 1953 under the rule of King Sisavang Vong. The monarchy was opposed by former nationalist guerrillas organised into the Laotian Patriotic Front (LPF) whose fighters, the Pathet Lao, formed an alliance with the Viet Minh nationalists in neighbouring Vietnam to expel the residual French, and later to counter US influence in the region and the regimes supported by them.