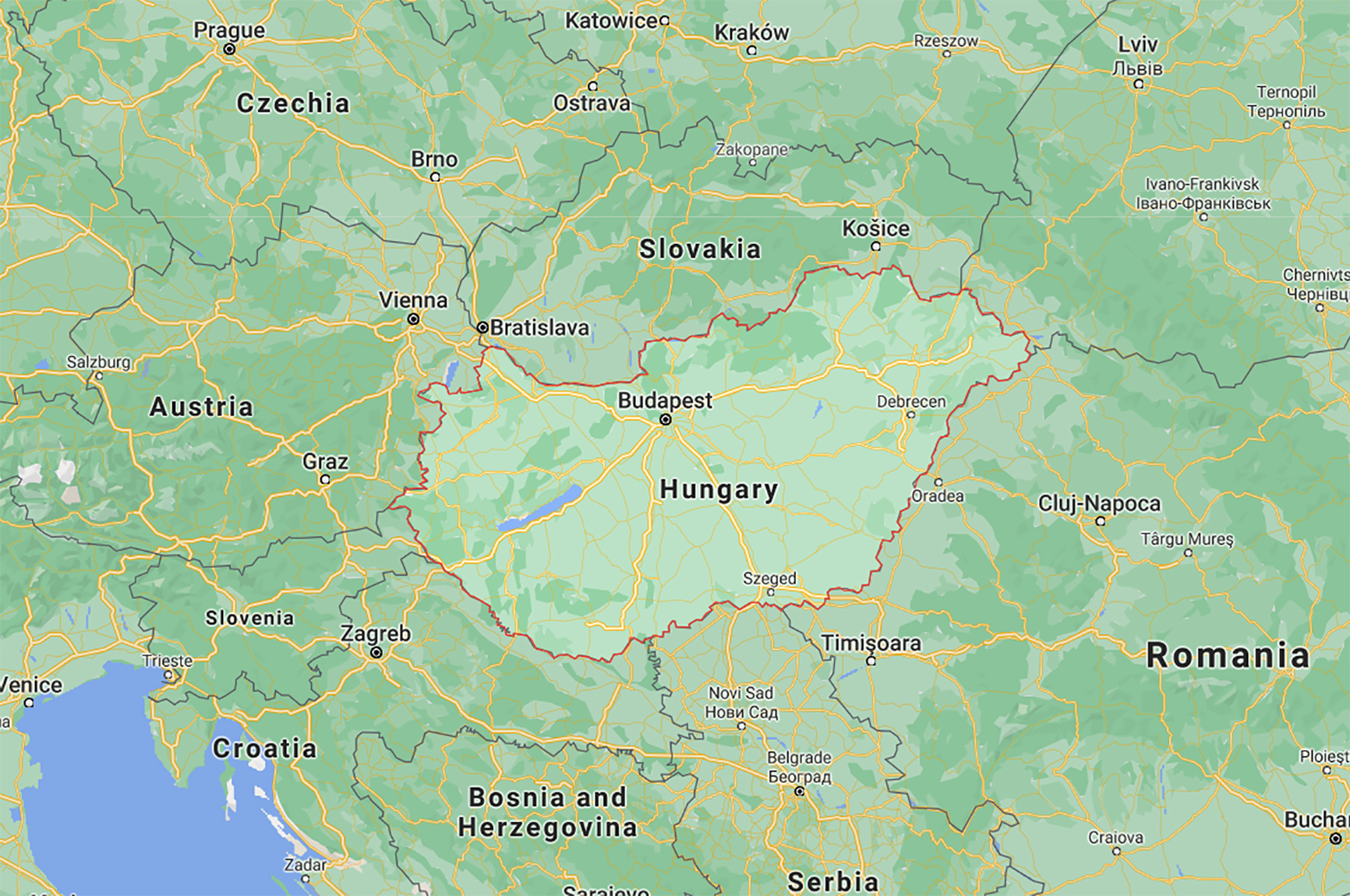 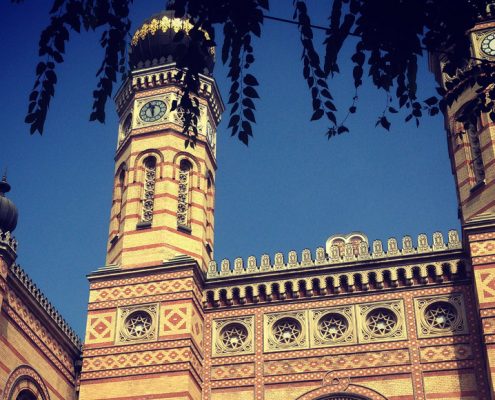 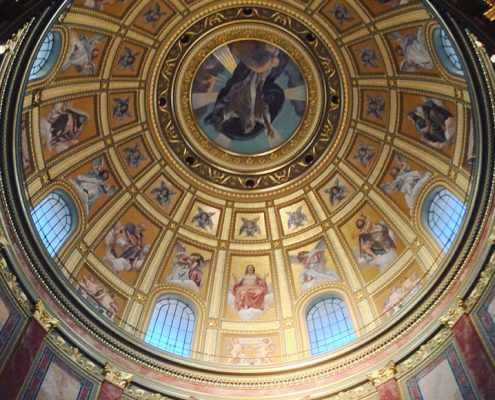 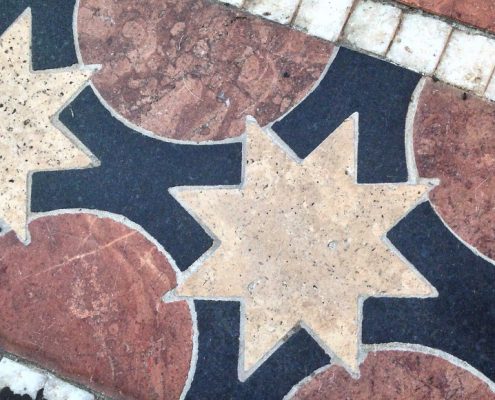 Situated in Central Europe, land-locked Hungary borders Slovakia to the north, Ukraine to the northeast, Romania to the east, Serbia and Croatia to the south, and Austria and Slovenia to the west.

The country is largely low lying, although the north and west give way to hills. The enormous flat Great Hungarian Plain, which lies between the Danube and the Carpathian Mountains, the Transylvania mountains in Romania, and the Fruška Gora mountains in Serbia, comprises more than half of Hungary’s total territory.

Two major navigable rivers run through Hungary: the Danube and the Tisza. The former flows through Budapest on its way to the Black Sea. The River Tisza flows south from Ukraine, through Hungary and into Vojvodina in northern Serbia, where it merges with the Danube. Smaller rivers include the Szamos, Sío, Rába, and the Drava, which consitutes the border with Croatia. In western Hungary lies Lake Balaton, the largest freshwater lake in Central Europe, known as the ‘Hungarian Sea’.

Hungary has a mild continental climate with four distinct seasons. Summers are hot between June and August, with temperatures as high as 35°C. Spring and autumn are mild, but winters are very cold, dropping to around 10°C – avoid visiting rural areas during this period. The south of the country is on average warmer than the north, although the region near Pecs still sees snow in the winter. Rain falls consistently throughout the year, averaging about 6cm annually. The country is largely low lying, although the north and west give way to hills. The enormous flat Great Hungarian Plain, which lies between the Danube and the Carpathian Mountains, the Transylvania mountains in Romania, and the Fruška Gora mountains in Serbia, comprises more than half of Hungary’s total territory.

In the capital, Budapest, visit the bathhouses with their thermal springs and medicinal pools, the graceful Habsburg and neoclassical buildings, elegant coffee houses and witness the spectacular view of the Danube. Try a wine-tasting tour in one of the highly regarded winegrowing regions such as those at Tokaj and visit the city of Györ with its cobbled pedestrian shopping streets and attractive baroque city centre. Get a taste of ancient rural Hungary at the Open-Air Museum Sóstói, in eastern Hungary and travel along the Danube Bend to visit the historic towns of Szentendre, Visegrád and Esztergom. If you enjoy fishing, make your way to the River Tisza, widely regarded as one of Europe’s premier angling spots, and find carp, bream, pike, trout and tench in abundance. Visit the large thermal lake at Hévíz and Lake Balaton‘s plentiful sandy beaches. Pécs is home to the fifth-oldest university in Europe and has many fine examples of architecture from the Ottoman period.

The central European territory we now know as Hungary was first colonised in the ninth century by the Magyars arriving from the south of Russia (Finno-Ugric nomads). Unil then it had been occupied by Romans, Slavs, Celts, and Avars. Here the Magyars settled permanently, establishing a unified kingdom under their ruler Árpád that was to last nearly 1000 years.

An invasion of Mongols at the end of the 13th century devastated the Kingdom of Hungary. However it slowly re-established itself as one of the major European powers over subsequent years. After the Mongols finally abandoned Europe, a new threat from the Ottoman Turks became apparent. Matthias Corvinus, who was the last great ruler of medieval Hungary succeeded in defeating the Turks who tried to invade at the end of the 15th century. Unfortunately, Corvinus’ successor was less successful, and Hungary fell under Ottoman control during the 16th century and was unable to reclaim its independence until 1718. By the early 18th century, Hungary had a firm ally in Austria, and had become part of the Habsburg Empire ruled by a Magyar aristocracy.

Despite a number of rebellions during the mid-19th century, Hungary remained essentially a feudal state until the end of the First World War when, in 1918, it finally dissolved its alliance with Austria. Hungary supported Nazi Germany during the Second World War, until 1944 when German troops occupied the country and the Hungarians sought to break the alliance. Following the Russian invasion in January 1945, Hungary became a short-lived republic before joining the Warsaw Pact as a Soviet-style socialist state in 1949. Poor living conditions and widespread political purges eventually sparked the Hungarian Revolution in 1956, during which  Hungary attempted to withdraw from the Warsaw Pact and to restore a multi-party system. The rebellion was soon quashed with the support of the Soviet army, leaving an estimated 20,000 dead and nearly 250,000 Hungarians in exile. Despite this fierce suppression of freedom, Hungary went on to be considered one of the most liberal countries in the Eastern Bloc. This was in large part due to the 1968 introduction of the ‘New Economic Mechanism’, which permitted private enterprise and the market to take on significant roles in the Hungarian economy.

During the 1980s the political situation relaxed still further, and when the Soviet Union collapsed in 1989 Hungary began the transition to a pluralistic political system. The first free elections were held in the spring of 1990, when the Hungarian Democratic Forum, a centre-right umbrella group, came into power. The introduction of strict economic reforms resulted in difficult conditions for many Hungarians, and in 1994 the Hungarian Socialist Party, led by former communists, gained the parliamentary majority.

As a result of a national referendum in 1997, Hungary became a full European Union member in 2004.