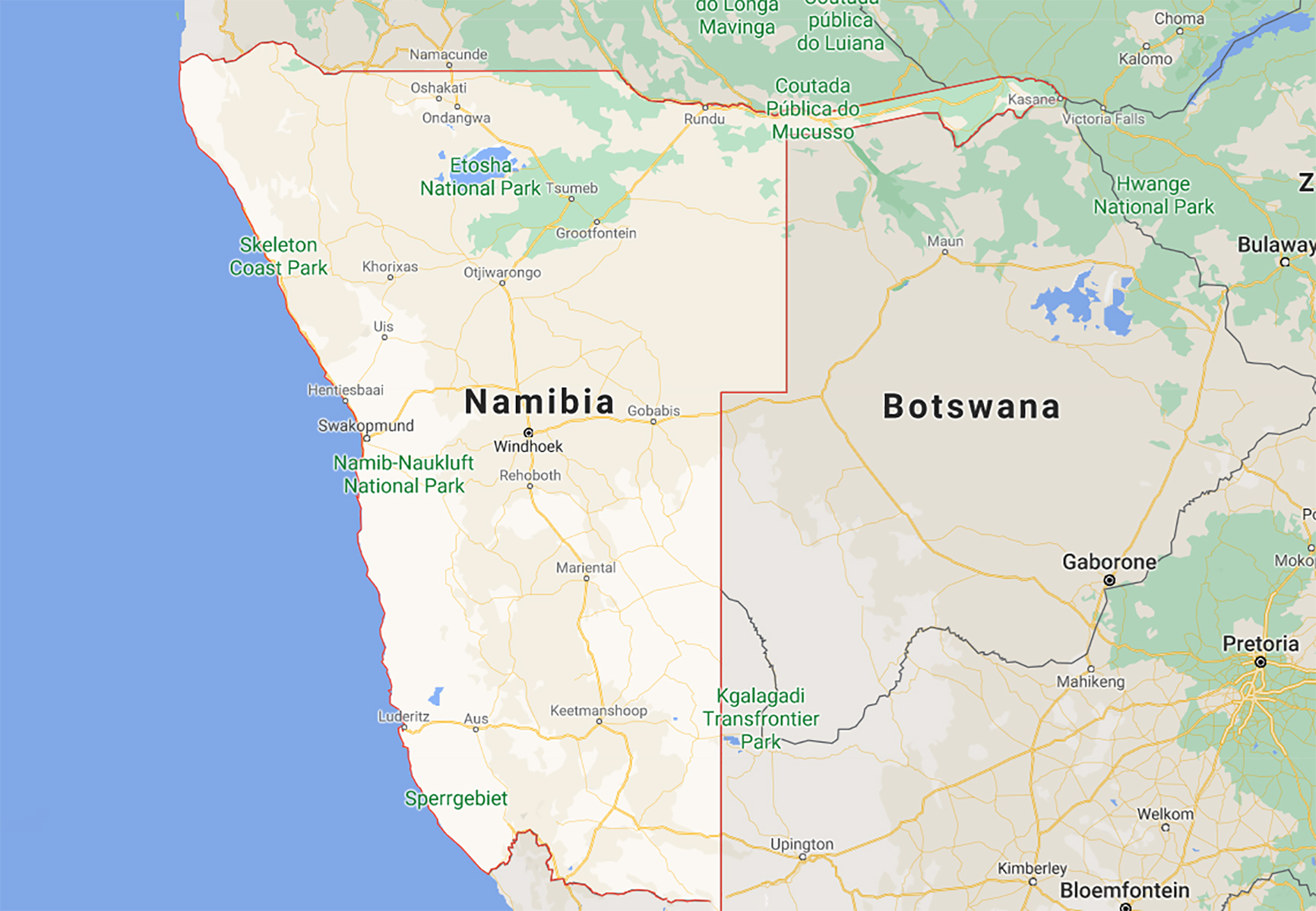 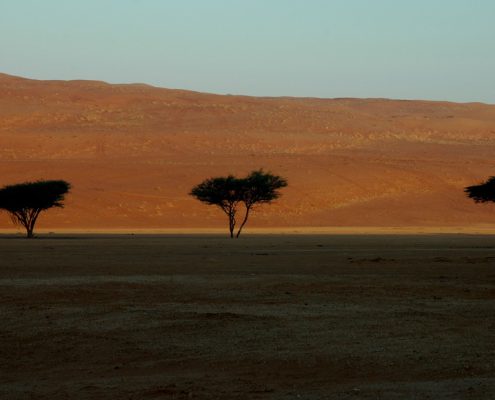 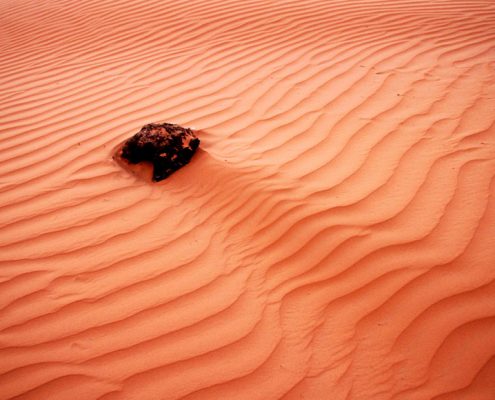 Formerly known as South West Africa, Namibia is, unsurprisingly, in southwest Africa. It is a large and largely barren country sharing borders with Angola to the north, Botswana to the east, South Africa to the south and, in the Caprivi Strip, a narrow panhandle of Namibian territory jutting from the north-east corner of the country, with Zambia and Zimbabwe.

To the west is 795 miles of possibly the most desolate and lonely coastline in the world. The port of Walvis Bay, situated roughly halfway down Namibia’s coast, is jointly administrated with South Africa. Along its entire length, the vast shifting sand dunes of the Namib Desert spread inland for 50-80 miles. In the interior, the escarpment of a north-south plateau slopes away to the east and north into the vast interior sand basin of the Kalahari. In the far north-west the 25,500 sq. miles of the Kaokoveld Mountains run along the coast, while further inland lies the Etosha Pan (the giant of Namibia’s saline lakes), a flat, lifeless, dry river bed, surrounded by grasslands and bush which support a large and varied wildlife. The Etosha Pan National Park & Game Reserve is one of the finest in Africa, in that it remains, to a large extent, free of man’s influence.

The coast of the Namib Desert remains cool, damp and free of rain because of the cold Benguela current. It also causes a dense coastal fog. Inland, all the rain falls in summer (November to April). In the summer temperatures are high with cool nights because of the altitude. Winter nights can be fairly cold, but days are generally warm and pleasant.

In the Namibian desert, silence reigns like nowhere else on earth. This is a country of such vast emptiness that it can barely be comprehended. Alien, moon-like landscapes stretch out under a night sky so full of stars they are barely distinguishable.

An empty coastline, aptly named the Skeleton Coast, is peppered with half submerged shipwrecks, though Namibian landscapes tend to have been shaped more by the African sun than any human factor. Despite its arid climate, Namibia claims of Africa’s most spectacular wildlife parks, in the lush green north that resolutely defies the creeping dryness of the south. The Etosha National Park draws all manner of animals to its watering holes, giving you outstanding opportunities to view elephants and rhinos, impala and zebras, to name but a few. With more than 300 days of sunshine per year, if you are looking to escape the weather this may well be the destination you’re looking for.

The Etosha National Parkand Game Reserve is one of the most famous game sanctuaries in the world. There are vast stocks of wildlife, particularly elephants, lions, zebras, giraffes, springboks, kudus, gemsboks or oryxes, hyenas, jackals, leopards and cheetahs. The Fish River Canyon is in the south of the country and only second in dimensions to the Grand Canyon. Ai-Ais and Gross Barmen are hot spring resorts and there are spectacular falls at Augrabies.

The Brandberg/Twyfelfontein area has some very ancient rock paintings and a petrified forest and is sometimes known as The White Lady. The Namib Desert is more like the surface of the moon with its towering sand dunes (some of them 1,000 ft high) and is believed to be the oldest desert in the world. Namib Naukluft at 18,057 square miles is the fourth largest conservation area in the world.

There are campsites in the Namib Desert at Sesrien and in the Naukluft. The delightful little seaside resort of Swakopmund is situated in the middle of Namibia’s coastline, with interesting buildings dating back to the time when Namibia was a German colony. Windhoek is the attractive capital surrounded by mountains, with several examples of German colonial architecture including the Christuskirche, the Alte Feste and the Tintenpalast (Ink Palace).

Colonisation, first by the Germans and then by the South Africans, destroyed many of Namibia’s rich and diverse cultural traditions, but Namibia still retains a strong character of its own; the people have retained their distinctive identities even though most of their original traditions now only survive in remote rural areas.

Namibia was a German Imperial Protectorate from 1886 and a German colony until the end of the First World War. In 1920 the League of Nations Mandated its country South Africa, which imposed its laws and later its apartheid policy.

The history of Namibia from the foundation of the United Nations in 1945 to Namibian independence in 1991 was dominated by the repeated refusal of the South African government to convert their League of Nations mandate to administer the country into a UN trusteeship, or indeed to recognise that the UN, or any other organisation, had a legitimate interest in the region. In 1973 SWAPO (South West Africas Peoples’ Organisation) was finally recognised as the official representative of the Namibian People, though it remained under South African administration until 1988 they agreed to withdraw their troops from Angola as an essential preparatory step before a Namibia settlement which quickly followed, giving Namibia independence from South Africa in 1990.

Although there have been some complaints about alleged inefficiency and corruption, SWAPO, which won the elections held in November 1989, has clearly jettisoned its revolutionary rhetoric, knowing that Namibia’s future prosperity depends on overcoming the former divisions between different elements in the country. Namibia is now a parliamentary multi-party democracy, though SWAPO has won every election since independence. It retains tentative links with countries that aided during the struggle for liberation, such as Libya and Cuba.

Namibia’s economy remains fragile, and sadly it does not qualify for international aid, so as a result is struggling to battle the HIV/AIDS epidemic and improve educational opportunities for its citizens.