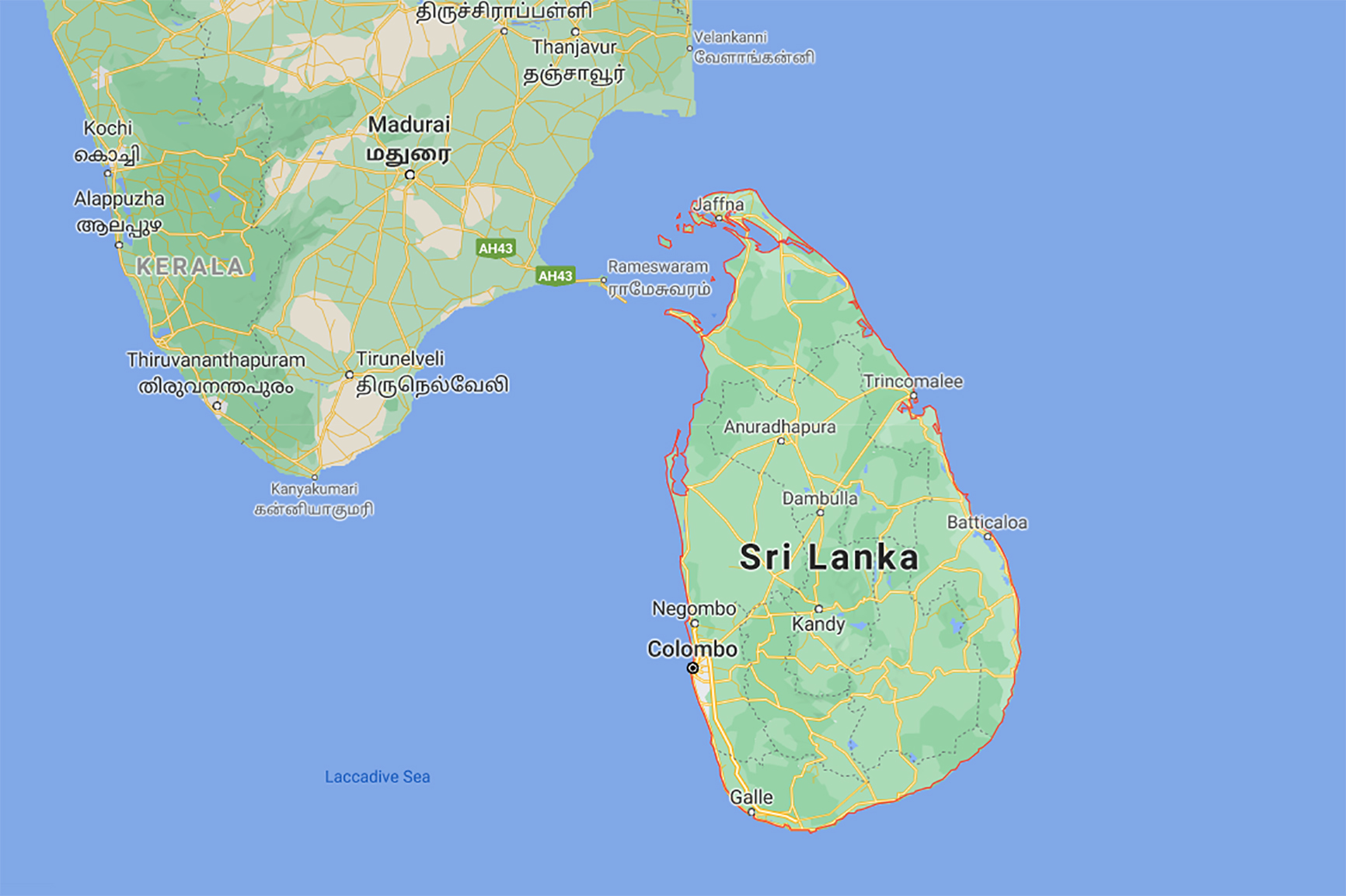 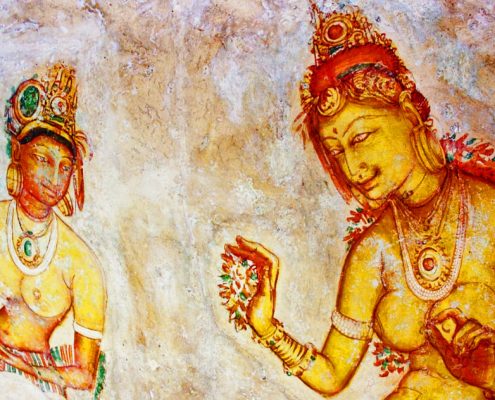 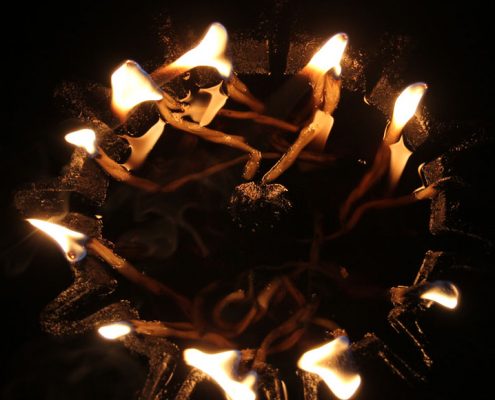 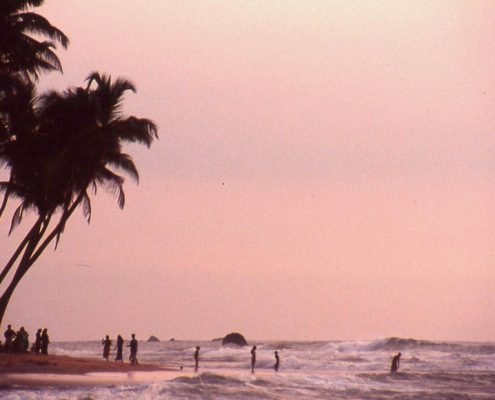 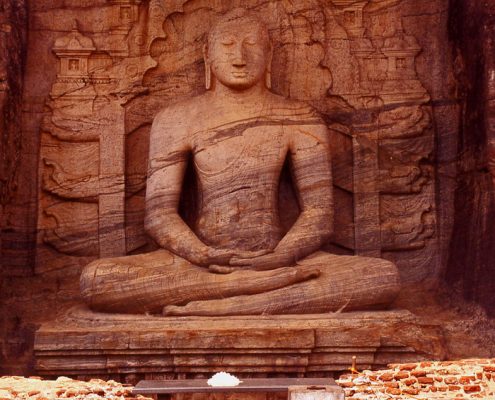 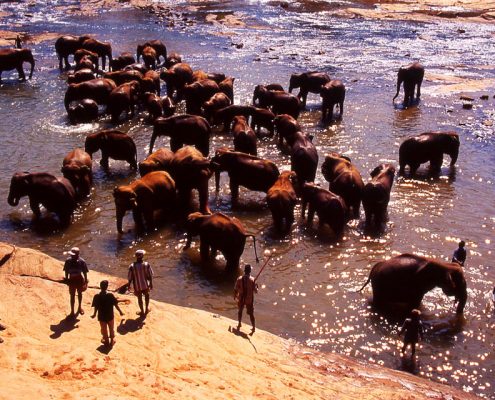 The island of Sri Lanka lies in the Indian Ocean, to the southwest of the Bay of Bengal. It consists mostly of flat-to-rolling coastal plains, with mountains rising only in the south-central part.

Tropical climate upland areas are cooler and more temperate, and coastal areas are cooled by sea breezes. There are two monsoon seasons, which occur May to July and December and January.

Polonnaruwa is the country’s medieval capital with superb well-preserved temple ruins and palaces. The Gal Vihare complex here is probably the most famous with impressive rock sculptures.

If you’re a golf fan head to the 18 hole course at Nuwara Eliya, Sri Lanka’s most popular hill resort, with the country’s highest mountain, Pidurutalagala (8,282 ft) nearby. Kandy, the last stronghold of the Kandyan has fascinating ancient customs, arts, crafts. Visit the Temple of The Sacred Tooth Relic, Royal Botanical Gardens and myriad temples and museums.

Climb up Sigiriya built by an obsessed monarch in the 5th century. The rock rises 200 meters and has a flat summit where the Royal Palace was once located. The Golden Temple at Dambulla must also be seen as it has been a centre for pilgrimage for Buddhists and Hindus for over 22 centuries. The Cave Monastery depicts the life and times of Lord Buddah with vivid frescos, the largest antique painted surface int he world.

Formally known as Ceylon, this tear drop island a stone’s throw from India’s southern tip combines stunning coastal scenery and fertile hills covered in fragrant tea plantations with a deliciously balmy tropical climate. Offering a thousand miles of palm-lined beaches with crystal clear water and colourful reefs the island is most certainly one of the Indian Ocean’s gems.

Indians, Portuguese, Dutch and British have all left a delightful blend of colonial architecture, which, along with ancient ruins and wonderful wildlife, makes Sri Lanka a wonderfully exciting destination.

The inhabitants were originally converted to Buddhism during the third century when the Asoka Empire ruled, however, a persistent wangling with The Tamils in Southern India has constantly influenced Sinhalese life. The capital was moved to Polonnaruva in the south to escape the repeated Tamil invasions during the 11th and 12th centuries.

The first Europeans arrived in the 17th century closely followed by the Dutch. 1796 saw Ceylon over run by the British thus establishing their control from the Dutch in a power share between the East India Company and The Crown. The Crown finally taking full control in 1802.

Independence arrived in 1948 with the country becoming a republic in 1972; thus establishing a new constitution along with the Sinhala name Sri Lanka. Modern day Sri Lanka shows many influences mirroring the island’s past colonisation by the Indians, Portuguese, Dutch and British with a diversity of architecture, every day customs, language and agricultural methods evident throughout. The majority of the population from Sinhalese descent (70%) remain Buddhist. The northern regions (15% of which are Tamil) are predominantly Hindu with close links to southern India.

Once the country became a Republic in 1972, serious conflict arose from the Tamil minority (occupying the north and east), who demanded a separate state. The dispute/civil war escalated in 2006, particularly in the northeast where the Tamil people make up a majority of the population, closing off much of the country to tourism. Conflict between the Tamil Tigers (Liberation Tigers of Tamil Eelam) and the government has resulted in the death of approximately 100,000 people since the start of the conflict about 26 years ago.

The country was also devastated by the 2004 tsunami, which killed more than 30,000 Sri Lankans and wiped out many coastal communities. Finally, in 2010 it was removed from FCO restricted travel lists, opening up the region once again for travel. Visitors will be guaranteed a warm welcome in Sri Lanka, where tourism has the power to lift the country back onto its feet. It is now one of the fastest growing economies in the world.